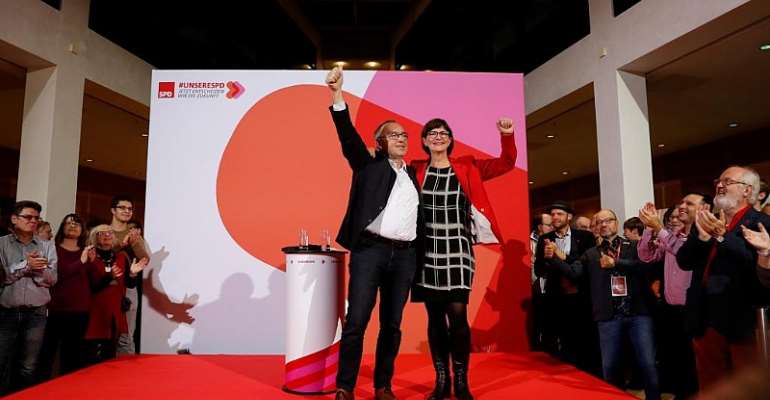 The future of Germany government has been thrown into question after the centre-left Social Democrats elected a relatively unknown left-wing duo who campaigned on a threat to pull out of Chancellor Angela Merkel's ruling coalition.

It's a clear indication of the party's dissatisfaction with its role in the ruling coalition.

The "anti-Merkel coalition" pair, as dubbed by German media, have vowed to lead the SPD “out of the neoliberal wilderness” and said they would consider quitting the chancellor's government.

Here is a look at the pair:
'Robin Hood'
A former finance minister for the North Rhine-Westphalia region, Walter-Borjans is referred to in German media by the nickname "Nowabob".

The 67-year-old is also often called the "Robin Hood of taxpayers" for a spectacular move against tax evasion.

In 2011, he arranged the purchase of data on German tax evaders in Switzerland. The repatriation of their assets swelled government coffers by billions.

Walter-Borjans started out in politics in 1984 and quickly rose through the ranks of regional government.

Between 2010 and 2017, he served as the region's finance minister with the support of the party's more leftist youth wing.

He has said he is a "staunch social democrat" but has not openly called for an end to the coalition.

Anti-far-right campaigner
Esken, 58, is best known for her campaigns in favour of equal opportunities and digital access and against the far right.

She was first elected to parliament in 2013 and is on the left of the party. She favours state intervention in the fight against climate change.

Born in Stuttgart, Esken joined the SPD in 1990 and held various roles in the regional administration of Baden-Wuerttemberg.

In 2009, she set up an "Alliance Against the Right" in the town of Calw, where the neo-Nazi NPD was planning to set up its regional headquarters.

She has been critical of the coalition and its "politics of small steps".

Esken, who enjoys the support of the climate strike movement Fridays for Future, has demanded new investments on the climate.

She has also warned Merkel's CDU that if it categorically refuses to negotiate, she would "recommend that the party leaves the grand coalition".