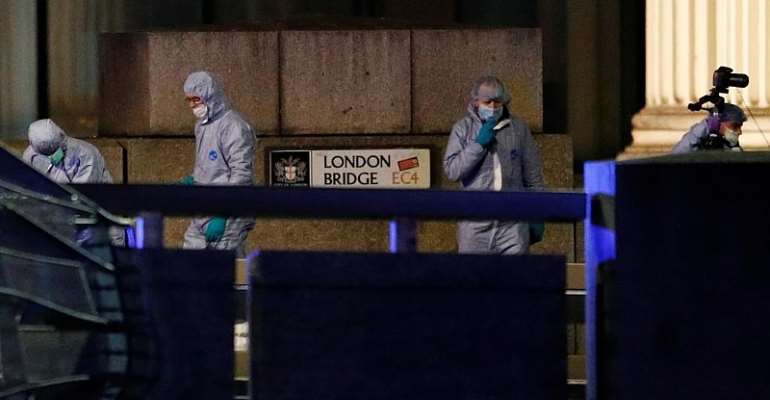 The man who stabbed two people to death in Friday's terror attack on London Bridge was an ex-prisoner convicted of terrorism offences and released last year. The attacker was wrestled to the ground after his rampage before he was shot dead by police.

The knifeman, wearing a suspected hoax explosive device, was shot dead by police after Friday's daylight assault that also saw bystanders intervene to try and disarm him.

Three more people were wounded in the stabbing spree that came less than two weeks before Britain votes in a general election.

Police named the suspect as 28-year-old Usman Khan, saying they were not actively seeking any other persons in relation to the incident.

"This individual was known to authorities, having been convicted in 2012 for terrorism offences. He was released from prison in December 2018 on licence," Neil Basu, head of UK counter-terrorism policing, said in a statement.

​​​​​​​In 2012 Khan, from Stoke in central England, was jailed along with eight others in a terrorist group inspired by Al-Qaeda that had plotted to bomb targets including the London Stock Exchange.

He was sentenced to a minimum of eight years in prison and was also found guilty of making longer-term plans including taking part in "terrorist training" in Pakistan.

Hoax explosive device
All the victims of the knifeman's attack were taken to the Royal London hospital in Whitechapel, east London, one of the capital's four designated major trauma centres.

After several of the casualties were reported to be seriously wounded, it later emerged two had died.

Anti-terrorist squad officers said in the wake of the incident that they were treating the assault as a terrorist incident after the man was found to be wearing a hoax explosive device.

London Bridge train and underground stations were closed as police cordoned off the area around the bridge.

Shelter
Shoppers and office workers were ordered to take refuge while officers scoured the immediate vicinity for more explosives.

The stations were eventually reopened four hours after the start of the incident at around 6pm on Friday evening.

In 2017, eight people were killed when terrorists drove a van into crowds crossing London Bridge before attacking others with knives on the bridge and in neighbouring pubs and restaurants.

The three attackers involved in that incident were shot dead by police and were found to be wearing fake suicide vests.

“This is an appalling incident and all my thoughts are with the victims and their families,” said Johnson.

"We must – and we will – stay resolute in our determination to stand strong and united in the face of terror," added Khan. "Those who seek to attack us and divide us will never succeed."

Khan said footage shared on social media of the people trying to bring the suspect down revealed their bravery.

“What's remarkable about the images we've seen is the breathtaking heroism of members of the public who literally ran towards danger, not knowing what confronted them,” he said.

“It's another example of the bravery and heroism of ordinary Londoners running towards danger, risking their own personal safety to try and save others.”

British Transport Police (BTP) said on Friday night that there would be more patrols of armed officers in London over the weekend.

"This follows the London Bridge terror incident," the BTP tweeted. "Please don't be alarmed by their presence, they are there to keep you safe."