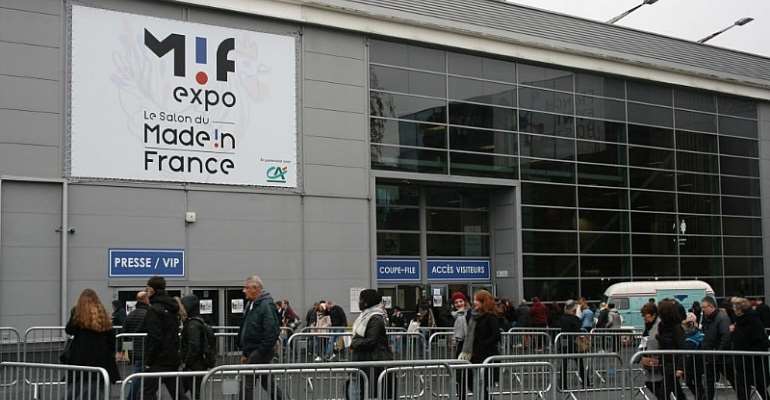 The appeal of buying French products remains strong as consumers braved the rain  to queue up at the 'Made in France' fair. For a large majority domestic products not only support the local economy but are a guarantee of quality.

Walking through the entrance of the Porte de Versailles conference centre, visitors are greeted by an array of products ranging from ties and bedding to pots of honey, proudly stamped with the label "Made in France."

The fair has grown in size because the label "Made in France" has surged in popularity, explains Fabienne Delahaye, its founder.

Supporting local economy
"People are conscious today that when they buy in France, they're sustaining the local economy, preserving a certain tradition and know-how and protecting the environment," she told RFI.

A few metres away, jeweler Alain Bellouard, from La Rochelle in south-west France is showing home-made bracelets to potential customers that can be readjusted to fit their wrist.

"We attract all kinds of customers," he tells RFI.
"What they like about our products is their quality. Our bracelets don't break. In France, we have a history of craftmanship and attention to detail that you can't find in products, which are made quickly, cheaply and very far away from us," he says referring to competitors like China.

A certain "French spirit"
For Bernard Vanderschooten, a third generation textile maker, consumers both at home and abroad are searching for authenticity.

They're looking for a certain "French spirit: this knowhow that is passed on from generation to generation," he tells RFI.

The label "Made in France" has also attracted right-wing populist leaders like Marine Le Pen, who visited the fair on Saturday.

Vanderschooten though makes a clear distinction between his quest for authenticity and Le Pen's.

“We don't speak about politics. We're just speaking about sincerity. (...) On our booth we have a picture. This is Sylvie. Sylvie worked for us for twenty years. She doesn't care about politics. The political people do their job. We do ours.”

Lack of transmission
If Vanderschooten is quick to dismiss politics, it is also because he has other more pressing matters at hand.

"We are trying to preserve the know-how in our company and it's very difficult because the textile industry, as you know, has been in a big crisis for a long time."

Other exhibitors like Audrey Mayol, whose family has been selling socks for centuries, are also worried about transmission.

"We really want to keep this know-how, but in France, there is no school to teach what we make everyday in our factory,” she told RFI.

Meaningful shopping
Elsewhere, Davy Dao, who makes sustainable jeans out of linen instead of cotton, which consumes more water, reckons that consumers' increasing desire for ethical practices could swing the balance.

"People today want to give meaning to their shopping. They want to know where their products come from, how they're made and by whom. The tendency is towards local shopping.

"People are tired of products that come from the other side of the world," he said.