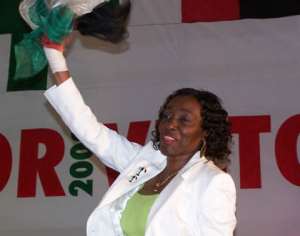 The Statesman and other papers in tune with the inner pulse of the National Democratic Congress predicted earlier this year that the grand design of the former First Couple, Mr and Mrs Rawlings, is for the two of them to return to power, preferably through the best constitutional route available to them. The man may be constitutionally barred but certainly not the woman.

The plan, as disclosed by us, was first to float the names of a few but predictable aspirants as the couple's preferred presidential candidate for the opposition party. Then turn around to engineer for the bubble of those aspirants to be shot down in no time. And, with the party desperate for a 'winnable' candidate, the membership would have to settle ultimately on Nana Konadu Agyemang Rawlings.

In line with this scheme, NDC 'founder', Mr Rawlings has proceeded to let some of these men believe, individually, that they are his men. The names are John Evans Atta Mills, Ekow Spio-Garbrah, Eddie Annan and Mahama Iddrisu. The question was: why would the former President tell all these loyal 'friends' of his to go for a position that can be filled by one person only at any given term? The answer is in the one person t hat Ghana's longest serving head of state can possibly trust – his wife. With less than nine months to go for the NDC to choose its 2008 presidential candidate, Mrs Rawlings has finally decided to stick her neck out. She has done it this week and in a very vivid way.

The message was loud, bold and clear in the Ghanaian Democrat: As America and Europe Ask For Female Presidents – GHANA: A WOMAN PRESIDENT NOW.

The paper is unrepentant in floating Mrs Rawlings as a candidate. The report, which runs into three pages, cited countries such as Liberia, Sri Lanka, Chile and Germany where women have been elected for the top job. It went on to mention the United States where the two major political parties are both considering female candidates for 2008.

The NDC paper even takes credit for Mrs Clinton's probable candidature for the US presidency.

The Ghanaian Democrat writes: “Significantly, Hillary Clinton, wife of the immediate past President of the United States, during a visit with her husband [sic] Ghana, got startled, when the President of the 31st December Women's Movement, Dr Nana Konadu Agyemang Rawlings, took her round [sic] to visit the many Day Care Centres and economic projects for women, initiated and run by the Movement. She returned to America with inspiration and courage on the advice of our former First Lady to be politically active.”

It continues, “Hillary on back in America ventured the New York senate slot and won to become a senator. Today she is being eyed by her husband's party, the Democrat for President of the United States of America.”

Without mincing words, the paper controlled by the former First Couple poses the big question: “So if a Ghanaian woman could instill such courage into a woman from such a powerful nation in the world, like America, what makes it impossible for our women to approach the Presidency in elections?” It proceeds to offer an answer: “There is nothing in the lazard's [sic] stomach. Ghana must go for a woman President.”

The Ghanaian Democrat 'report' then goes on to extol the virtues of the 31st DWM, as far as crediting the Movement for bringing “enlightenment [to] women in Ghana since the Movement was established.” The paper accuses Government of persecuting the Movement and its leader. It compares Mrs Rawlings to Chile's female leader Michelle Bachelet, who in December ended the male dominance of Chilean politics and showed how democratic pluralism is blossoming in the post-Pinochet era.

Recalling her family's persecution under General Pinochet, the paper said of Bachelet: “Yet, neither she nor the women folk were demoralised. They broke all boundaries that traditionally bound them… to encourage women and organised them, the way the President Nana Konadu with her 31st December Women's Movement, is gently advocating for women's empowerment.”

The Ghanaian Democrat is the officially sanctioned newspaper of the NDC. It was so announced at a press conference held during the first term of the NDC and attended by top members of the NDC.

The paper edited until 2002 by Razak Alawa and funded from the Castle under the NDC regime is widely reported to currently have Mrs Rawlings and Victor Smith, Special Aide to Mr Rawlings, as the Editors-in-Deed.

Razak Alawa recently had a publicised battle with Mrs Rawlings' 31st December Women's Movement over ownership of a battered pick-up truck in his possession. Mrs Rawlings' method of using the media to float her candidacy has seen her float the National Democrat, through a surrogate called Doku from Tema. She is also known by insiders to be the power behind the Crystal Clear Lens. During her husband's second term she granted an interview to BBC saying she would only go for the Presidency if her husband encouraged her to do so.