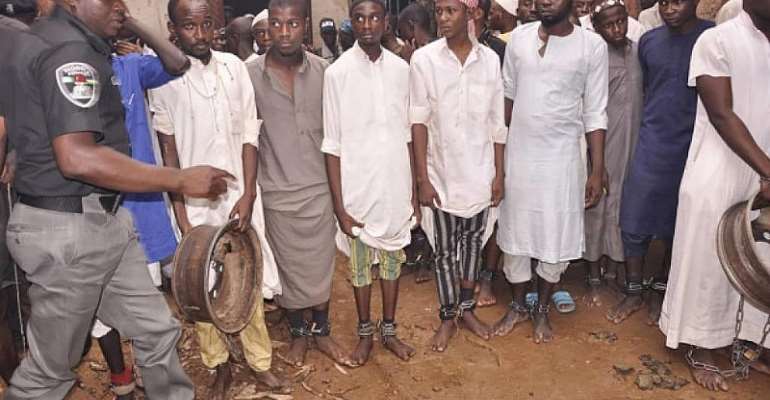 President Muhammadu Buhari has ordered a crackdown on illegally-operated Islamic schools in northern Nigeria after hundreds of boys were rescued from so-called reformatory centres, where they were reportedly chained to walls, beaten and abused. Authorities described conditions as "places of horror".

Social media in Nigeria has been awash with graphic images from so-called “Almajiris” in Katsina metropolis, Kaduna, Kano and in president Buhari's home town of Daura.

The strict system of Islamic education is practiced in northern Nigeria. Almajiri derives from an Arabic word, rendered "al-Muhajirun" in English transliteration, meaning a person who leaves his home in search of Islamic knowledge.

Houses of horror
A young man rescued from one of the so-called schools, presented himself to a correspondent of the Nigerian Tribune, as a university graduate in mathematics who had registered for a Master's degree at Pretoria University.

He told the newspaper, he was taken forcefully to the centre and chained up for three months, so he could “learn about the Koran and Islam”.

Kaduna state police chief, Ali Janga described a building 100 km from the state capital, where some 500 boys, were freed three weeks ago and several people arrested, as “a place of horror and modern slavery”.

“The detainees, including children as young as five found in chains were alleged to have been tortured and sexually abused,” he said.

Muslim rights groups in Nigeria say up to 10 million children, may be in the hands of the barbarians, running the so-called reformatory “boarding” schools, some, taken there by their own parents.

National consternation
"The reaction of Nigerians has been one of revulsion, but some of us from the predominantly Muslim north, we have always suspected that something like has been happening. But not as bad as it has turned out to be”, says Abubakar Kari, a professor of political sociology at Abuja University.

The academic told RFI there was an important element about the abuse that was not sufficiently emphasised – the fact that the houses raided were not standard Koranic schools but traditional correctional institutions.

Cultural abuse?
“It's part of the age-old culture of the Hausa and Fulani that has not faded away, to send delinquent children to such homes where corporal punishment is used, presumably to cure them of delinquent behaviour," Kari notes.

He attributes the hardline practice to the loose nature of Koranic system of education in Nigeria, which is very informal and unregulated.

According to the professor, “just about anybody can become a Malam (cleric) to whom parents just give their children”, adding that the schools don't issue any certificates at the end of the children's stay, meaning there is no formal curricula.

Momentum for reform
Kari urged Muslim leaders to stand up and regulate the system, to bring some uniformity in training schemes.

He believes the timing is right to undertake such reforms on a national basis, at a moment when a Muslim president is at the helm of the country.