Dealing with the Problem of Plastic Waste in Ghana 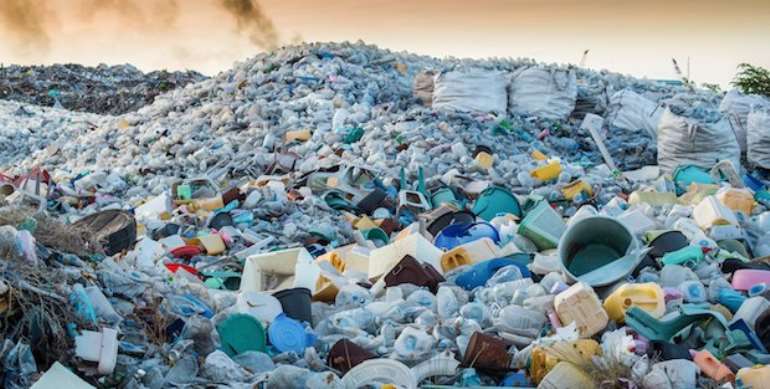 Background
Statistics from the Accra Metropolitan Assembly show that more than 912,500 tons of waste are generated annually in Accra. Out of this, only 410,625 tons representing 45 percent are collected while the 55 percent which are mainly plastic remain in the system.

Plastic waste has accounted for a major portion of the total amount of waste generated in terms of net-weight. Only two percent of single-use polyethylene terephthalate (PET) bottles are recycled. The rest get scattered over the streets, choke gutters and drainpipes and resist free flow of water after rainfall.

The Minister for Environment, Science, Technology and Innovation, Prof. Frimpong-Boateng, believes that the increase in the generation of plastic waste globally is as a result of economic growth and changing consumption production patterns. PET recycling is the best way to effectively deal with used up PET bottles and clear the environment of filth, but it isn’t profit-oriented so no company can really do it without government support.

Efforts so far to deal with the problem are not promising enough. For example, a waste management project dabbed “IRECYCLE,” launched by Voltic on November 23, 2018 was able to collect 200kgs of plastic waste by March 3, 2019. This means that only 0.2 tons of plastic waste was collected in a period of four months. Not encouraging.

Effects
The effects of dysfunctional urban waste management systems in the lives of Ghanaians can’t be overemphasized. The World Health Organization (WHO) reveals that about 28,000 premature deaths that occur in Ghana are air-pollution-associated.

The trauma of the June 3, 2015 flood situation is still fresh in the minds of many a Ghanaian who lost a relative on that fateful day. It is further estimated that by 2050, the oceans will contain more plastics than fish by weight. This really calls for general concern.

Efforts to deal with the menace
For over a decade today, conferences, seminers, workshops and other stakeholder engagements have been held intending to deal with the menace of plastic waste. These consultative engagements have been convened by the Ministry of Environment, Science, Technology and Innovation (MESTI). The intention was to advance course in behaviour change of consumers and producers towards less plastic usage and production, respectively.

Government introduced a 10% Environmental Excise Tax (EET) in 2011 targeted at levying plastic manufacturers in Ghana. The purpose of which was to establish a Plastic Levy Fund Authority to harness funds to manage the plastic waste menace in the country. That money to be generated is meant exclusively for plastic recycling.

Way Forward
Section 9 of the Control and Management Regulations Act 2016 (LI 2250) should be enforced. The Act mandates persons who produce beverage products, to set up and manage or join a take-back system for primary and secondary packaging and recycling of waste. It also requires the EPA to decide on recycling rates in consultation with beverage manufacturers and other stakeholders.

Further, the amount realized so far from the Environmental Excise Tax (EET) is almost GH₵1 billion, according to Mr. Botwe, Chairman of the Plastic Waste Management Programme, Ghana (PWMPG). This can be used to assist private partners in the plastic waste recycling business as part of the IDIF initiative to establish recycle plants in all regional capitals.

To add to that, Ghana should introduce legislations to ban the importation and use of non-biodegradable plastic products.

A Comprehensive Sanitation Education (CSE) should be introduced in the school curriculum. The main aim of which should be to inculcate the habit of proper waste handling in kids and to redirect improper behaviour of students at higher level towards patriotism and love for the environment.

Again, the sanitation and hygiene units of the various Metropolitan, Municipal and District Assemblies should be reactivated and equipped to be able to supervise proper disposal of refuse. This can effect change in negative attitude if punitive sanction regimes are enforced.

More Article
ModernGhana Links
National Cathedral: Please Ignore Ken Ofori-Atta’s Provocation [Part One]
Application Under Right To Information Act, 2019 (act 936): Does The Reason Matter?
Public Policy without Respect
Research and development are key to resilient food systems in Africa
Five key reasons why basic income support for poor South Africans makes sense
What Kenya needs to do better as it braces for fourth wave of COVID-19
Nigeria isn't ready to deal with rising COVID-19 cases
Energy will play a critical role in the success of Africa’s free trade area —Damilola Ogunbiyi, Special Representative of the UN Secretary-General for Sustainable Energy for All
The number one priority for African countries is boosting oxygen production to give critically ill patients a fighting chance. Effective treatment is the last line of defence against COVID-19 and it must not crumble
TOP STORIES