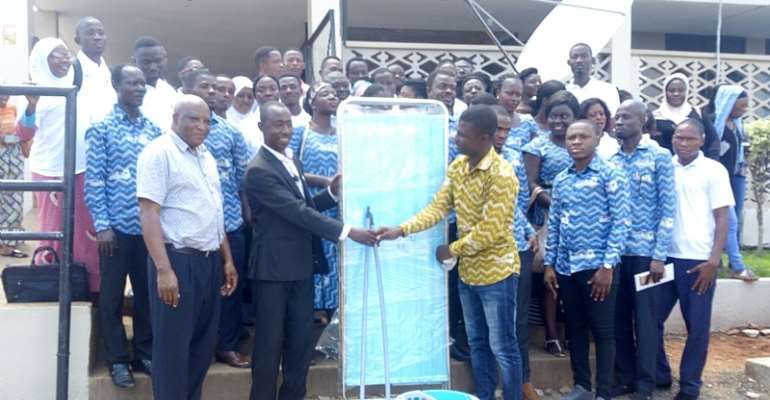 Hundreds of Nation Builders Corps (NABCO) beneficiaries in the Tafo Municipality in the Ashanti region have rounded-up their activities marking the first anniversary of the flagship programme by the government.

The beneficiaries of the programme undertook a float through some principal streets of the municipality amidst music and dance on Wednesday October 9th, 2019 and rounded-up the celebrations with a donation of some items to the Tafo Government Hospital on the next day.

Led by the Tafo Municipal NABCO Co-ordinator, Elijah Opoku Boahen, the beneficiaries donated buckets, mobbing sticks and a ward screen worth Ghc1,500 to the hospital, which serves several hundreds of communities within and outside the municipality.

The Hospital Administrator, Alex Abugri who received the donation on behalf of the facility thanked the NABCO beneficiaries for their kind gesture and promised to put them to good use.

He used the occasion to appeal to government to complete the maternity block at the hospital, which was started by the Kufour-led NPP administration but has been abandoned.

He added that the completion of the project will go a long way to improve maternal and neo-natal health within the hospital’s catchment area.

The Municipal NABCO Co-ordinator, Elijah Opoku Boahen, told journalists that the beneficiaries of the programme decided to make the donation as a way of “giving back to society” for the opportunities given them to serve the nation through NABCO.

He said the Tafo Government Hospital serves thousands of people in the area and so they thought it wise to reach out to the facility, hence the donation.