Japan struggles with rescue in aftermath of destructive storm 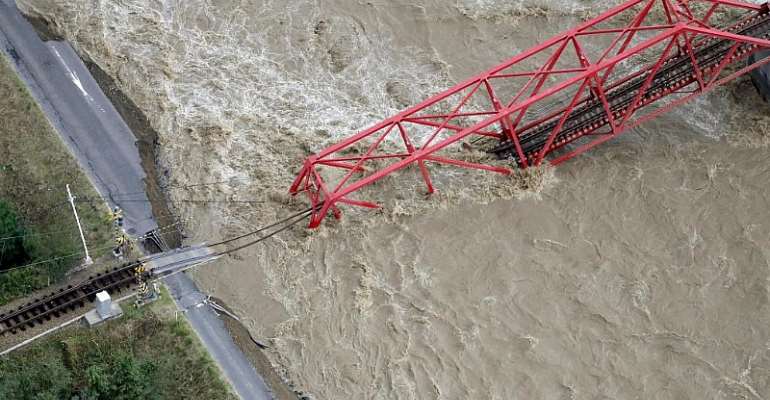 At least 14 people were killed and nine others missing after Typhoon Hagibis slammed into Japan, officials said Sunday, as rescuers scrambled to reach people trapped by catastrophic flooding. The storm's "unprecedented" heavy rain triggered deadly landslides and caused rivers to burst their banks.

By Sunday morning, the significantly weakened storm had moved back off land, but serious flooding was reported in several areas, including central Japan's Nagano, where a burst levee sent water from the Chikuma river gushing into residential neighbourhoods, flooding homes up to the second floor.

Military called in
Japan's military deployed 27,000 troops to aid rescue operations, including some in helicopters who winched people from the roofs and balconies of flooded homes in Nagano.

In Kawagoe, northwest of Tokyo, rescue workers in boats were evacuating elderly people from a retirement home that was heavily flooded in the storm.

One woman wearing an orange life vest clutched at rescue workers in hardhats as the boat moved through the muddy floodwaters.

Hagibis smashed into the main Japanese island of Honshu around 7:00 pm (1000 GMT) Saturday as one of the most violent typhoons in recent years, with wind gusts of up to 216 kilometres per hour.

The storm claimed its first victim even before making landfall, when high winds flipped a vehicle, killing its driver.

Landslides and flooding claimed more lives overnight, and the toll climbed higher after sunrise on Sunday, as the scale of the devastation wrought by Hagibis became clear.

On Sunday morning, organisers said they had been forced to cancel a third fixture, Namibia-Canada, but gave the go-ahead to three others including a crunch Japan-Scotland game in Yokohama, near Tokyo.

Scotland faced elimination if the match was cancelled and had threatened legal action if it was not played.