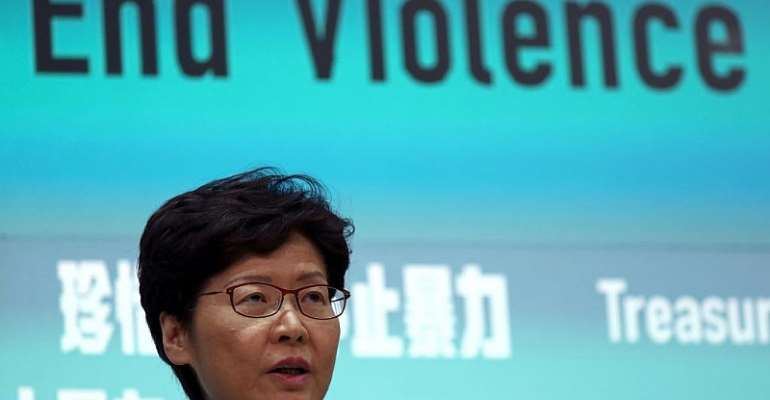 She could do so by invoking unparalleled powers under the 1922 Emergency Regulations Ordinance.

The ordinance grants the Hong Kong Chief Executive the ability to bypass the legislature in case of “emergency or public danger,” allowing her to make “any regulations whatsoever which [s]he may consider desirable in the public interest”

The document strikes a stark tone. It gives Hong Kong's leader the possibility to impose "censorship", carry out “arrest, detention and deportation” and "disposition of property", it authorises "entry and search of premises" and foresees the “trial and punishment of persons offending against...any law in force”.

There is no reference to the judicial system or due process.

"We believe that the new law will create a deterrent effect against masked violent protesters and rioters, and will assist the police in its law enforcement," Lam said.

Facial recognition
But critics charge that the anti-mask regulations are not about bringing violent rioters to justice.

“There is a potential that facial recognition technology could be used in order to identify citizens to who have been protesting in the streets,” says Ray Walsh, a digital privacy expert with digital freedom platform ProPrivacy.com, told RFI.

“Protesters are aware that the authorities already have been using CCTV footage that was taken from the media and footage taken by members of the general public.

The South China Morning Post reported in July about a government plan to unveil 400 “multifunctional lampposts” which will be equipped with sensors, cameras and data networks, among other facilities, to harness data for analysis and public use.”

The government stressed it “had no plans to collect facial or personal data,” the report says.

But Walsh disagrees. He points out that such devices could in theory send data back to China, where companies such as Megvii are at the global forefront of developing facial recognition technologies – and where human rights organisations say the government engages in massive face, and even speech recognition techniques to monitor its population.

“Cameras which are supposed to be used for monitoring traffic and number plates could be used to monitor people's faces, and at some point in the future they could potentially be singled out,” he says.

1967 riots
The Emergency Regulations Ordinance, that Carrie Lam used to issue the anti-mask laws was last invoked during the 1967 riots, a period where more than 50 people were killed in a year-long leftist bombing and murder spree.

It was first introduced by the British in 1922 to combat wildcat strikes by Chinese seaman who were protesting dismal wages.

“The fact that these laws were used in the colonial era before Hong Kong was a democracy is likely to add to the fire,” says Walsh.

“These are powers that have no place in a modern city that values freedom. It proves that Hong Kong is behaving more like China than like a fair democracy," he says.

The largest rally on Friday broke out in Central, where many blue-chip international firms are based, as thousands of protesters blocked roads, erected barricades and built street fires, preparing Hong Kong for yet another weekend of unrest.