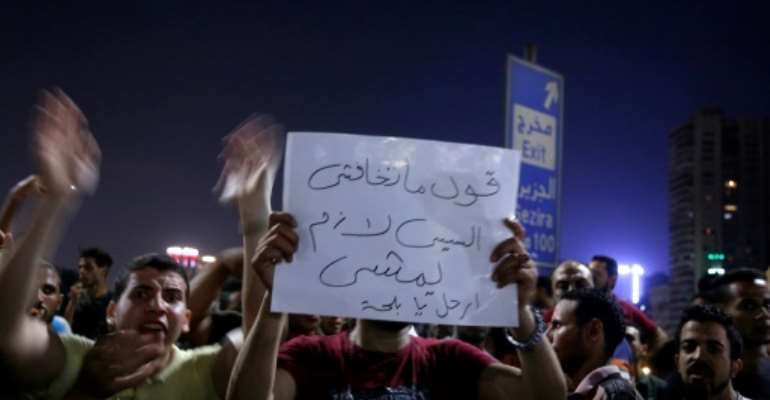 Protesters shout slogans as they take part in a protest calling for the removal of President Abdel Fattah al-Sisi in downtown Cairo on September 20. By STR (AFP/File)

Anti-Sisi protests erupted on September 20 after viral videos posted by an exiled Egyptian businessman accusing the president and the military of corruption tapped into discontent over economic woes.

Rights groups say more than 2,000 people, including lawyers, activists, professors and journalists, were detained in a wave of arrests.

Sudan said Sunday that student Waleed Abdulraham was among those detained and that its embassy had not been given access to him.

The foreign ministry summoned Cairo's envoy to Khartoum in protest at his detention.

"As a result of efforts taken by Sudan's ministry of foreign affairs and Sudan's embassy in Cairo, student Waleed Abdulrahman has been released," the embassy said in a statement issued to journalists in Khartoum.

"Tonight he will leave Cairo for Khartoum."

On Sunday, dozens of Sudanese had demonstrated outside the foreign ministry in Khartoum to call for Abdulrahman's release.

Elected president in 2014, a year after overthrowing his Islamist predecessor Mohamed Morsi, Sisi is seen as one of the most authoritarian figures in the Middle East.

But his supporters see him as a bulwark against the insecurity and political disintegration unleashed across the region by the 2011 Arab Spring protests.

In Sudan, a months-long protest movement led to the military's ouster of longtime ruler Omar al-Bashir on April 11.