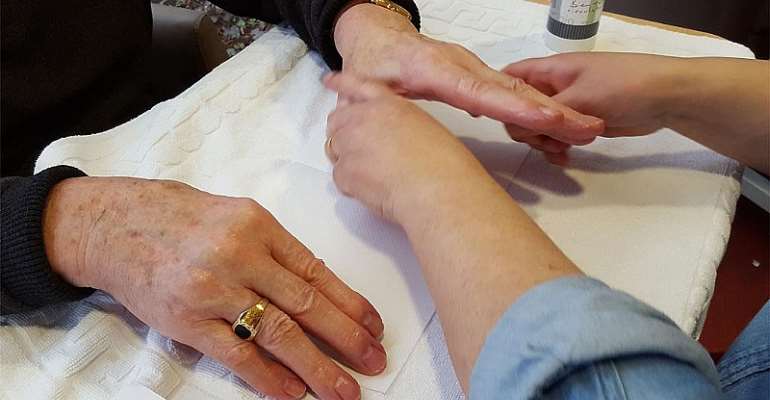 Over 11 million French people could be considered caregivers: they spend significant time caring for elderly parents, disabled children or spouses with chronic illnesses. They do much of the work that paid nursing staff does in hospitals, but without recognition and with no pay. That may be about to change.

Patients are treated well, says Rossinot, but the medical system, and the French administration, ignores those taking care of the patients.

Rossinot has recently published a book about the issue, called Aidants: Ces invisibles (Those invisible caregivers). In it, she calls caregivers the "invisible spine" of the French healthcare system.

Q: How are caregivers ignored?
Helene Rossinot: One of the cases I write about in the book really shocked me: A wife was coming to the hospital every day at lunchtime to see her husband, who was hospitalised.

The wife had to immediately ask her boss for time off that day, and a few hours later the patient was home, with a big medical bed in a very small flat.

Q: She was given no warning and no preparation ahead of time. How typical is that experience?

HR: I thought it would be an exception. It really was shocking to me. But, in fact, it was not. I heard that story at least three or four times, and I realised that it happens because health care professionals don't think about caregivers.

They think about the patient. And that patient was very well taken care of, there's absolutely no question about that. But they did not think about the fact that there is a wife, and she lives with a patient. Maybe we should tell her the patient is going home.

I'm not even saying that we should ask for a consent, that that's the next step. Before even thinking about consent we should even think that she exists.

Q: You call caregivers the “invisible spine” of the French healthcare system. What do you mean by that?

HR: Politicians today are pushing ambulatory care, or hospital home people going home to be treated. It costs less. And people are willing to be treated at home.

But that means people have to take care of them on a daily basis. So that means we need family caregivers. Nobody would be able to be taken care of at home without a spouse, children or someone close to them.

Q: France has a good healthcare system, often held up as an example to the rest of the world. There are resources for the disabled and the elderly, with rehabilitation centres and retirement homes. Why is the burden falling so much on family members?

HR: The system is be good, but patients are still going to live with their loved ones. You can't have a complete health care team at home 24/7. You would be in a hospital!

At some point when the healthcare professionals are not there, the caregivers are the only ones with the patients.

Q: Who did you write this book for?
HR: First, the general public, because some caregivers don't even know they are caregivers.

Also, healthcare professionals. They are not very good, for now, at recognising caregivers and knowing what to do. I can't blame them. I myself had never heard the term 'caregiver' before writing this book.

For my medical thesis I was supposed to be write about palliative care, and I discovered caregivers along the way. It was the first time in my medical studies I ever heard the term 'family caregiver'.

If I as a doctor I never heard about caregivers how do you expect people to know about them?

We need to start seeing caregivers as partners in the hospital. They know the patient and the medical history. They are often perceived as the waste of time, and some families do ask a lot of questions. But it's normal, and we doctors are not just there to solve technical problems. We are human beings.

Q: You are pushing for more recognition for caregivers. What would that look like, in France?

HR: First, it would look like a change in the law. It would also be a change of mind-set in hospitals, but also in companies or at school. Caregivers don't dare to talk about their situation. For example, you have a young caregiver, maybe eight- or ten-years-old…

Q: What do you mean by an eight-year-old caregiver?

HR: Before writing that book, I have to admit I did not even know that kids could be caregivers.

You would be surprised to hear the stories of those young caregivers. Nobody cares about them, even doctors.

When you're in the room with your parent and the doctor is telling your mom that she has cancer, for example. How many doctors are going to talk with the kid and say, 'do you have any questions?' I don't know any doctors right now who do that.

HR: It would enable the next step of maybe getting paid leave. Right now we have an unpaid leave for caregivers.

[Since 2017, caregivers can take three months unpaid time off, renewable up to a year. It guarantees your job, but it is unpaid, and rarely taken.]

There is also the issue of pension rights during paid leave. Lots of caregivers are women, so usually the leave is taken by women, and if they have to stop working, that cuts into their pension contributions, which increases the gender wage divide.

[In July, health minister Agnes Buzyn promised to include a measure in an upcoming legislation on French healthcare, which would provide 40 euros a day for caregivers on leave, which would also be counted in their retirement benefits.]

Q: It sounds as though things are changing, and the government will be addressing this issue in a legal framework sometime in the next year. How are you seeing that change?

HR: Already, talking about the topic is a change. But I'm afraid they won't go as far as we need. Because paid leave and pension payments are tools, which are needed because caregivers are burned out.

We need a change of mind-set. We need to talk to caregivers and guide them through the system.

We need to help them like see doctors for their own health, which is not a priority for them. We have to prevent caregivers from becoming themselves patients. If they get sick, it becomes a mess for the whole system.

If they become patients, they won't be able to be caregivers, so the patient will get sent back to the hospital. And if the caregiver goes to the hospital at the same time, well, it's two patients. Twice the amount of money. It's an aberration!

And we can do something about this. That's really something we have power over. We can do a lot for caregivers just by switching the way we see things, and by changing the system a bit.