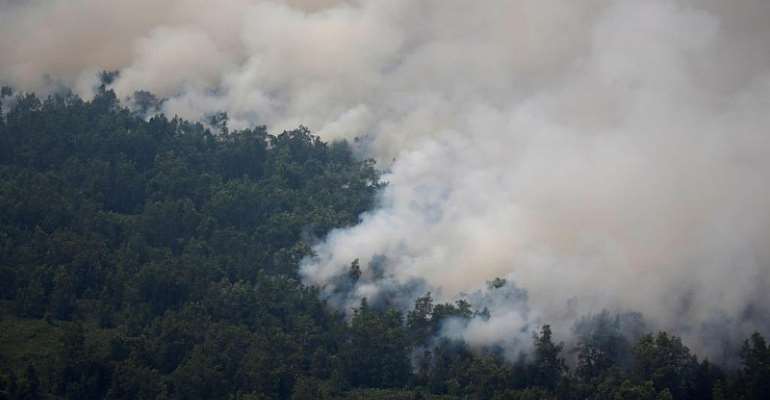 More than 1.7 million schoolchildren have been prevented from attending classes due to serious smog in parts of Malaysia. Smoke from forest fires in Indonesia have caused toxic haze. Tens of thousands of people have been called in to fight the smoke and fires which are described as the worst since 2015.

In Indonesia's Kalimantan, some 700 hot spots were still burning on Friday morning. More than 2,000 had been identified by satellite images

Indonesia and Malaysia have been worst affected by haze from the fires, which are burning on Indonesia's Sumatra island and the Indonesian part of Borneo in carbon-rich peaty areas.

Borneo, where Kalimantan lies, is shared between Indonesia, Malaysia and Brunei.

The smoke from the fires and burning peat has been clouding the air in the region since early September.

Widespread danger
Schools and airports have been closed since the smog masked visibility and made it unsafe for people with respiratory problems, allergies and those more vulnerable to air pollution, like children and the elderly.

According to local press reports, Malaysia has offered to help Indonesia but Jakarta says it has dispatched close to 30,000 people to take part in combatting the fires, smog and their harmful effects.

Affected neighbours
Malaysia is badly affected by the annual illegal slash-and-burn practices carried out by farmers in Indonesia.

In southern Sarawak, the worst-affected part of the country, official readings showed that air pollution had worsened.

In a bid to clear the air, the Malaysian authorities began cloud-seeding to generate rain.

Thick smog had been hanging over Singapore since last weekend.

The wind direction could however still change ahead of the weekend and push smog back over Singapore.

If that happens, F1 organisers have said they have been stocking up on face masks which spectators can by at the circuit.

Carbon reserves
As the fires have reached the underground peat, they are very difficult to extinguish. Peat acts as a carbon absorber which is why it is used as a fuel source. However, the forest fires in Indonesia lead to uncontrollable burning.

Experts say that the fires will only be put out by the seasonal monsoon rains which are due in October.

More than 200 people have been arrested on suspicion of causing the blazes.