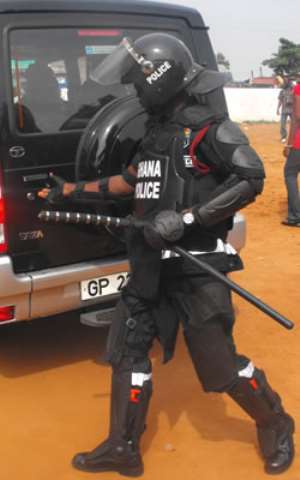 The debate about arming the Motor Traffic and Transport Directorate (MTTD) personnel in the Ghana Police Service continues – following the Interior Minister’s directive to the Acting Inspector General of Police to equip the MTTD personnel with the necessary accoutrements including firearms to ensure their safety while discharging their duty of protecting lives and property and maintaining law and order. This directive comes on the heels of five Police Officers killed within the last thirty days by unknown assailants. This directive, unfortunately, is a major shift in thinking because it will do virtually little to guarantee the safety of officers.

While the public is much concerned about the difficulties under which personnel of the MTTD and for that matter the entire police officers work in Ghana, however, learning from the American experience and other countries that have armed its officers, it certainly does not mean that police officers will not end up been killed in their line of duty even if the real motive is all about officers’ safety. Indeed, if officers have a palpable cause to be armed for self-defence, then civilians too must also be armed, and this will transform Ghana into an armed society like the US with its associated consequences. Arming the personnel of the MTTD with firearms will increase fear and distrust on our roads - turning our roads into armed battlefields.

Truly, this directive is considered as provocative and will inspire fear rather than reassurance. It will discourage peoples’ confidence in the police and will do little to minimise the number of attacks or violent incidents on our streets.

The very presence of the weapon will lead to increase hostility between the police and public – There are some people, probably the kind of people that encounter the police, that respond negatively to weapons, it provokes them. If the presence of weapons can lead to aggressive by suspects, so its concealment should be able to reduce aggression and increase officer’s safety (Barak Ariel - Cambridge Institute of Criminology - UK).

Time and again, I have argued that the government owes a duty to those upon whom it imposes legitimate responsibilities, in the same vein, the government owes equal duty to the civilians who consistently become less sensitive to their plights than it does to the Police. For instance, the Police have failed many times to properly protect the rights of citizens that they have sworn to protect, yet the Police Administration continues to seek for funding from the government and other benevolent organisations to equip its personnel. The level of crimes of violence in our various societies, and the increasing incidents of the use of firearms by armed robbers and land guards to attack both civilians and the Police have increased exceedingly and it is, thus, as a source of worry to many Ghanaians. Nonetheless, arming police officers will be perceived as putting hundreds and thousands of guns on the streets every day and this would be a major shift in our thinking space. A shift in our thinking space in the sense that the directive will change the focus of policing in Ghana and it will divert public attention from well-trained officers to officers who have specialised in shooting.

Additionally, my other major concern is the frequency with which such weapons are going to be carried and the legal liability of the armed officers must also be put into perspective. While this is grounded on the assumption that, it is right for some officers to be armed in certain situations, conversely, this hypothesis has seriously been challenged that the Police should not be armed at all. The reason been that arming the Police for their own self defence transfers the risk of injury irrespective of how far, from the police to the public. For example, inferring from a 13-year-old girl who recounted the incident that occurred at Kasoa on August 28, 2019, in which one of the Policemen who was shot by the assailant ran into their shop and asked them to take cover else, they could be hit by the bullet, shows the extent to which risk can be transferred from armed police officers to unarmed civilians. As Jocobs and Sanders (1986: 13) put it, access to guns is a privilege, a democratic country like Ghana cannot give privileges to one group and withhold them from another unless the first group has a greater right to, or need for, firearm protection than majority of the other groups of people.

In 2006, a survey was conducted on 47, 328 police federation members in the UK. Out of this figure, 82% did not want officers to be armed in the line of duty, even though almost about half of them said their lives had been seriously under threat in the past decades (BBC News 2012). This position was supported by the Police Superintendents’ Association and the Association of Chief Police Officers in the United Kingdom. Richard Garside, Director of the Centre for Crime and Justice Studies at the Open University also intimated that, if police are allowed to carry guns at their duty post it changes the rules of engagement. According to him, arming police officers with guns will undermine the principle of democratic policing as envisaged with the consent that the police owes its primary duty to the public, rather than the state. What the Ghana Police Service must focus on now is its prime objective of making the country safe for everyone without any forms of intimidation or violence that will be inimical to people’s survival.

The Police Administration must focus on training its personnel on conflict management, equip them with non-lethal weapons and improve their self-defence techniques. Empirical evidence suggests that the quality of police service can significantly improve until higher education requirements are instituted for its personnel. The complexities of police work are enormous as that of other professions like doctors and nurses. The performance of police work requires more than physical competence and common sense, and police personnel who found themselves in unpredictable situations like the one at Kasoa should possess a sound knowledge of tactical communications skills and behaviour of people. This can best be achieved through higher education. Research has shown that higher education would make the police more flexible, less hostile, less prejudiced, less authoritarian and less cynical. I therefore suggest that tertiary education certificates must be a prerequisite for new recruits into the Ghana Police Service.