Should The Police Wear Body Cameras In Ghana? 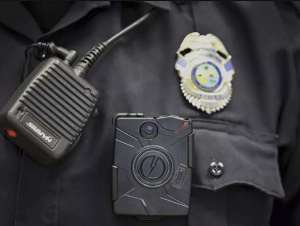 The Ghana Police Service is mandated by article 200 of the 1992 Constitution of Ghana, the Police Service Act 1970 (Act 350) to enforce democratic policing principles. Act 200 (3) stipulates that the Police Service shall be equipped and maintained to perform its traditional role of maintaining law and order. Additionally, there is also the Police Service Regulations 2012, Constitutional Instrument (CI -76) which regulates the conduct and behaviour of officers and outlines disciplinary measures to ensure police accountability during an encounter with citizens.

To many Ghanaians, democratic policing is primarily understood as a ‘service to the universal citizens’, based on a commitment to ‘human rights’ (Hinton & Newburn 2009: p. 167). However, these constitutional frameworks and democratic principles seem to have failed to function properly, as there are widespread public claims of incessant use of force or excessive use of force, arbitrary arrest, detention without trial, interrogation and use of violence to extract information are so prevalent in Ghana. This is exemplified in the UNDP (2007) Ghana Human Development Report on continuous excessive use of force by the Ghana Police Service with a concluding remark that “In fact human insecurity is evident along most streets, in both rural and urban communities” (UNDP 2007; p. 23).

Generally, it has been widely assumed that the Ghana Police Service has been characterised by abuse of power and authority by some of its members and the circumstances in which the police continue to use force or excessive force against the civilian population, seek to question the government and the institution’s respect for the rights of its citizens . Indeed, police officers are identified within specific cultural environment, the public see them as being hostile while ‘police believe themselves to be a distinct occupational group, apart from society’ (Crank 1998: p. 221).

Empirical findings suggest that since independence, the Ghana Police Service mode of operations (Modus Operandi) has not changed. According to Aning (2007), the institution’s nature, character and mode of operations of democratic policing has not changed from that of the colonial policing era, and argued that since its inception, the institution continues to function primarily to protect lives and properties of the state first and the citizens second.

It is evident that the public have lost trust in the Ghana Police Service’s ability to admit its wrong doing, and as a matter of fact, audio-video recordings evidence would have been more appropriate than ever for the public to expose police misconduct. In the same vein, the police also need audio-video evidence to exonerate themselves from wrongful accusations that usually come from the civilians. A typical case in point is the shooting incident that occurred at Manso-Nkwanta in the Ashanti region in which seven unarmed civilians were killed by an armed police patrol officers on July 17, 2018 under the pretext that they were armed robbers. The incident was not recorded. Thus, establishing the truth in matters of this nature sometimes becomes difficult and usually pave way for the public to speculate as some people end up giving different interpretations about the officers alleged misconduct. Worst of all, in such situations some people may lose their lives and may have no say in the course of establishing the truth.

It is for this reason that the writer welcomes the bold initiative by the Police Administration to provide police body cameras to its personnel to improve public trust and accountability.

The writer recognises the introduction of the police body cameras in the police service as a calculated step to modernise its operations in order to fulfil its vision of providing ‘Service with Integrity’. This technology has been adopted globally and was first introduced in the UK in 2006. Britain stands out for its widespread use and according to the Economist, most of the country’s police officers wear police body cameras and as of 2016, more than half of the local authorities had issued body cameras to some of their staff, including traffic wardens and even prison officers.

The point is that people behave quite well when they know they are being watched, and police are no exception. The advantage is that officers who wear body cameras are likely to be less aggressive and more respectful when they interact with members of the public. They will also be more reluctant to use force – unless it is crucial to protect themselves and the public.

Though police body-worn cameras may not be a panacea for poor policing, it will lead to a reduction in the use of force or excessive force by police officers and may be beneficial for both the police and the public to improve accountability.

Clearly, the police’s body cameras are not quite different from the dashboard cameras used by police officers in some jurisdictions neither are they also different from the ones we see on the streets such as the traffic cameras, CCTV cameras and our usual mobile phones. All these devices are used to record events and the videos or pictures can be tendered in as evidence at the law court when the need arises.

What makes the police body cameras quite distinct when used properly is that, it will improve public safety especially because when people get to know that they are being watched, they usually behave well. Similarly, police officers will be very much cautious when dealing with the public especially on the use of force. Besides, police body cameras can aid in documenting evidence, resolving complaints from the public and strengthening police transparency and accountability (COPS, 2014).

Inasmuch as the writer welcomes this bold initiative by the Police Administration for providing body cameras to its personnel to enable them provide evidence to approve or disapprove alleged misconducts, the writer’s concern is that the introduction of the device defies logic with respect to privacy and trust. For instance, when one is recording an event, people may be captured by the camera without knowing. What is more, some victims may not want their identities revealed or the event to be recorded and become a permanent trauma that could be revisited anytime in the future especially when such videos go viral or posted on the social media.

In such situations, the people in the video may have little or no control over who should watch the video. In the same vein, the police may also see the body camera as a form of distrust because they may feel that the purpose of the device is to monitor or track their movements.

While the writer appreciates the efforts being made by the Police Administration to introduce this device, he thinks the Unit should have done a wider consultation with some security experts and scholars in this field of endeavour to gain a comprehensive understanding surrounding its use before considering its implementation.

More appropriately, introducing this device requires a thorough evaluation in order to serve the purpose for which it will be used. For example, the storage and management of the audios and videos produced by the body cameras need thorough planning. Without that, it could lead to a total waste of the tax payers’ money especially when it fails to improve the critical issue of public trust and accountability.

These matters are worthy of consideration by the Police Administration and fast forward, they could also ponder over these thought-provoking questions in their quest to introduce police body cameras in Ghana;

First, should Ghanaians trust the police generated videos for forensic evidence for instance, if the video does not fully show the officer’s actions because the camera is worn in the officer’s body?

Second, when the police make claims that the video footage is not available, how will the public accept that the camera was not working at the time of the incident, or will that lead to the usual false accusation that the police are trying to hide the evidence from the public?

Again, can these videos be released to the media without all parties involved permission, especially when the public are demanding for the truth?

Admittedly, while it is too early to draw conclusions, the Police Administration must design some appropriate solutions to these thought-provoking questions to allay any possible fears associated with the implementation of this gadget as to whether the device will invade public privacy or whether it will improve public trust and accountability?