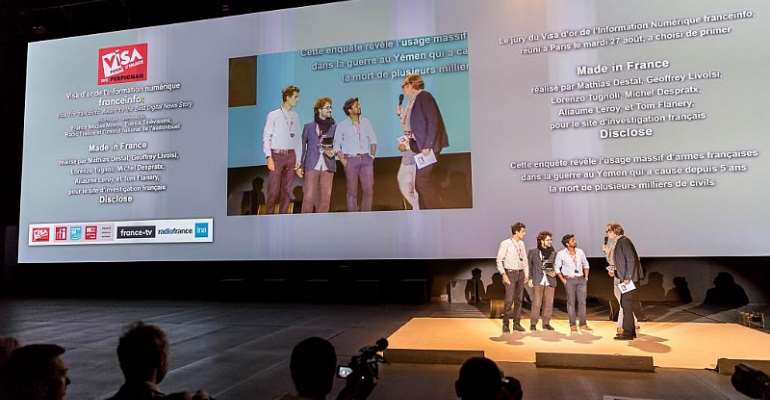 The investigative website Disclose has won the Visa d'or for Best Digital News for its work on France's role in selling arms used in Yemen's civil war. The France Media Monde sponsored award was presented to the team at the Visa pour l'image photojournalism festival in Perpignan.

Entitled "Made In France", the 15 page dossier published by Disclose contains inventories and deployment locations of weapons produced and sold by France and other Western powers to Saudi Arabia and the United Arab Emirates.

The online publication uses a combination of text, graphics, photos and video to highlight France's involvement in the four-year civil war in Yemen, which has seen thousands of civilians killed, many indirectly via arms sold to the Saudi-led coalition.

Disclose founders Geoffrey Livolsi and Mathias Destal, along with other partners, were summoned to court in April after France's domestic intelligence agency opened an investigation for “compromising national defence secrecy”.

Sharing the stage with Destal and photojournalist Lorenzo Tugnoli, Livolsi said their work was important in making sure western powers, in this case France, assumed their responsibility in the war.

Life in Eastern Ghouta
A visibly nervous Abdulmonam Eassa accepted the International Committee of the Red Cross Humanitarian Visa d'or for his work in Syria, “Life as experienced by residents throughout the siege of Eastern Ghouta”.

His photos paint a poetic yet chilling picture of the daily lives of residents caught up in one of the most brutal Syrian army-led operations against rebels in Eastern Ghouta in 2018. The United Nations called it “barbaric and medieval”.

Unfinished project
What happens to women in France once they finish prison sentences? Do they integrate into life or remain isolated from friends and family?

Axelle de Russé set off on a photography project to answer those questions. And while her work has not yet been completely finished, the jury of the Pierre and Alexandra Boulat award believed the recognition could help to realise it.

In memory of Camillle Lepage
Thomas Morel-Fort received the Camille Lepage prize for his work on documenting the hardships of Filipino nurses.

Now in its fifth year, the prize is awarded to a photojournalist in need of support to complete his or her report.

The prize was presented to Morel-Fort by Lepage's parents.

It was created to honour photojournalist and RFI correspondent Camille Lepage, who was killed in 2014, aged 26, while covering the conflict in the Central African Republic.