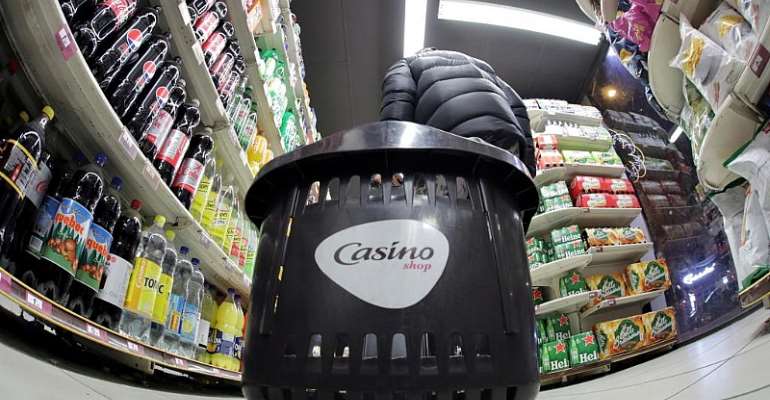 One of France's biggest supermarket chains kept a hypermarket open on Sunday afternoon in the town of Angers, west France, with automated check-outs replacing staff. More than 200 people came to protest at what they see as a worrying trend.

The 5,000 m2 Casino La Roseraie superstore in the town of Angers, west France, employs 115 staff, but none were working on Sunday afternoon.

Instead, from 13h to 21h, shoppers scanned and paid for their shopping at automated check-outs, “a first for a hypermarket,” according to the retail giant's communications department.

“People don't need an extra half day of shopping,” Jean Pastor, union rep with the Casino group in Angers told AFP. “There are already sufficient opening hours as it is.”

He cites the fact Casino has distributed vouchers that are valid only on Sundays "to get clients to come on that day in order to justify the opening".

But the major concern is how replacing cashiers by machines will lead to job losses. If that happens "how will our health system be financed in the future", he questions.

Upscaling the Paris experience
Casino has already tested staff-free supermarkets in big cities like Marseille and Lyon, it opened Le 4 Casino near the Champs-Elysées in 2018, and there are a growing number of convenience stores in Paris with automated check-outs. They rely on contracted security guards during late-night opening hours or on Sunday afternoons when working hours are restricted.

But for Olivier Dauvers, a specialist on the retail sector, the Angers experiment is of an altogether different order.

“We've gone from the small shop in Paris where there is objectively a flow of clients day and night [...] to a hypermarket in a seemingly 'ordinary-looking' town where people will think they could wait until Monday morning to do their shopping.

"This is on a different scale, we've taken a symbolic step and that's what shocks unions and staff. If Casino manages to do this in Angers in a hypermarket, we're opening the door to something that could, if the consumer wants, become fairly widespread.”

Half of shops already automated
More than half the shops in France offer their customers automated check-outs in addition to cashiers, suggesting the French appreciate the freedom to choose how they pay. But for Dauvers, the decision to replace all staff with automated check-outs reflects a growing trend for "self-servisation" whenever possible.

“Every time we can transfer tasks which are the responsibility of the shopkeeper - who pays someone to do something - over to consumers who will do it themselves, for free, you save money,” he explains.

The other motivation is the desire to increase retail capacity.

“In the past supermarkets did this by opening bigger and bigger stores," he says, "but you can scarcely open more in France because there are already so many.  So what do we do? We extend opening hours."

Recent reforms to French labour laws eased Sunday opening hours but there are still restrictions on supermarkets opening after 13h on Sundays, essentially to protect small grocery stores, butchers, bakers and so on. By employing none of its own staff, only contracted security guards, Casino could avoid potential legal action.

"They're circumventing the spirit of the law," Antoine Lelarge of the CFDT union told RMC radio, describing Casino's action as a form of "economic war" pitting small shops against big supermarkets.

But for Dauvers, the trend towards opening as much as possible has gained ground, independent of dissuasive legislation.

“Beyond the legal framework, 15 or 20 years ago very few shops were open on Sunday mornings, even if it was legal. Now you have many towns where it's become the norm, including for hypermarkets.”

The norm maybe, but the way ahead won't necessarily be easy.

“I was in Angers to see from the inside,” says Dauvers. “People were grumbling, there was a demonstration, some customers were insulted by protesting staff. It won't be a smooth ride.”

Don't super-size it
If the experience of automated check-outs in the US and China is anything to go by, fears over the Angers hypermarket going forth and multiplying may be exaggerated.

Amazon Go opened its first walk in walk out store in the US in 2018. No staff, no check out, only you and your smartphone. It plans to open 3,000 such stores within by 2021 but progress is slow.

Both the Chinese and American supermarkets are closer to convenience stores in size. And there may be a good reason for that.

“It could work in small shops in busy areas, in Paris, in city centres," says Dauvers "but personally I don't believe in a self-service hypermarket for consumers and in particular in the middle of the night.

“Can you imagine feeling reassured shopping in thousands of square metres, on your own, with a security guard? No. We're talking a lot about it but I don't think it's the future of the French retail industry.”