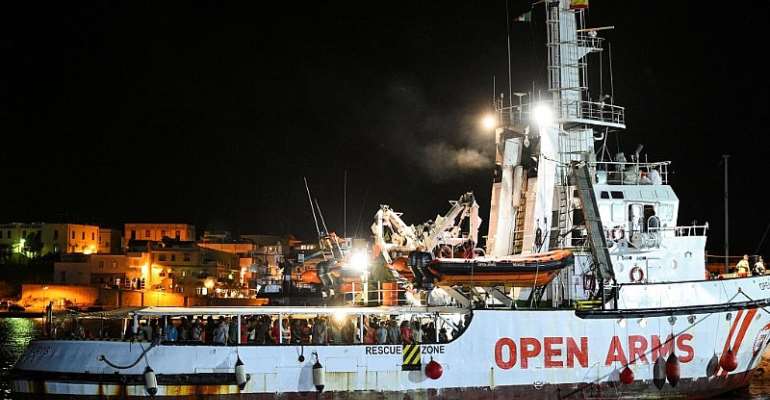 More than 80 migrants stranded in the Mediterranean Sea came ashore on the Italian island of Lampedusa late Tuesday following a stand-off between the Spanish charity that operated their ship and the government in Rome.

The mostly African migrants were removed from the boat after an Italian court ordered them to be brought ashore.

Before docking late in the evening, the boat had spent six days anchored off the Italian island, which sits some 200 kilometres from the coast of North Africa.

Many of the people had been on board for 19 days after having being picked up while trying to make the difficult journey from Libya to Europe in smaller boats.

A local prosecutor ordered the ship brought to dock amid a probe of far-right Interior Minister Matteo Salvini for forbidding their entry to port.

Salvini, who may lose his job later on Wednesday after his bid to bring down the Italian government led his coalition partner Giuseppe Conte to step down as prime minister, had forbidden all humanitarian vessels from entering Italian ports.

Prosecutor Luigi Patronaggio ordered the ship brought ashore after judicial police and doctors noted tensions on board during an inspection.

Tensions on board
The charity had warned the situation was out of control, with many migrants suffering post-traumatic stress and threatening to commit suicide. Fifteen migrants had jumped into the sea earlier on Tuesday in an attempt to swim to the island.

“The boat will be temporarily seized, but it is a cost that Open Arms assumes to ensure that people on board can be taken care of,” tweeted Oscar Camps, founder of Spanish charity Proactiva Open Arms, which operated the ship.

There were initially 147 migrants on board, but some were evacuated for medical care and all minors were allowed to disembark.

Six European countries have offered to take them in, including France, Germany, Romania, Portugal, Spain and Luxembourg.

Salvini still refused to allow the ship to dock, tweeting that “being firm is the only way to stop Italy from becoming Europe's refugee camp again.”

Salvini 'doesn't care about human lives'
Spain tried to break the standoff by offering its port of Algeciras, but the NGO said it was not possible to make the trek due to the distance and tensions on board.

Spain had sent a naval vessel with the intention to pick up the migrants and escort the Open Arms ship to Palma de Mallorca in the Balearic Islands.

The Spanish government was not able to confirm whether the ship would turn back now that the migrants arrived on Lampedusa.

“What Salvini is doing in relation with the Open Arms is a disgrace to humanity as a whole,” she said Monday.

Salvini “has shown he doesn't care about human lives,” she added Tuesday.