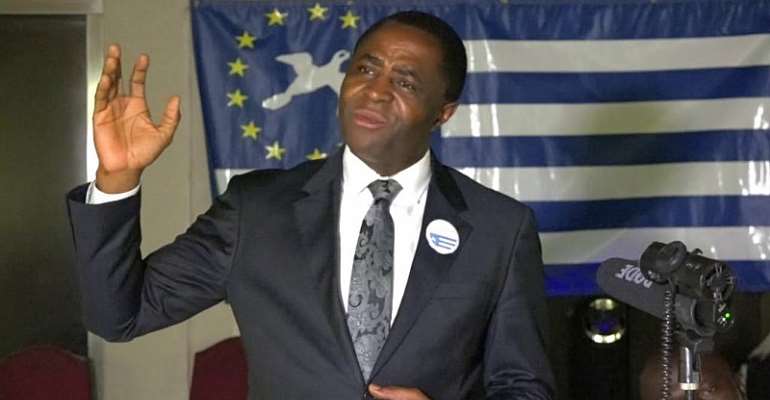 Julius Ayuk Tabe, a top figure in the Anglophone separatist movement, was among the leaders given a life sentence. Some believe that sentencing the former businessman, seen as a moderate who puts dialogue before violence, could create more unrest.

"Ayuk Tabe became the symbol of the movement, but that movement has moved on. The groups on the ground now are inflicting violence," said Akere Muna, an opposition politician and former presidential candidate.

"Whatever happens to him now might radicalise moderate Anglophones," he added.

The push to secede began in earnest after a government crackdown in the Northwest and Southwest English-speaking regions of the Francophone country. Anglophones were angered that Francophone teachers and lawyers were being brought to their regions to work and teach.

Illegal extradition
The 10 Anglophone separatists, who call their country Ambazonia, were among the 47 Anglophone Cameroonians arrested in Nigeria in January 2018. They were extradited back to Cameroon for the trial, which a Nigerian court and the lawyers for the separatists said was illegal.

"This judgment is biased," said Afah Ndetan, one of the group's lawyers, after the verdict.

"They violated the rights of the accused because the law was not taken into consideration," he added referring to the extradition from Nigeria.

Some Anglophone Cameroonians have called for dialogue with the Francophone Cameronnian government, but made the release of Ayuk Tabe necessary for them to come to the bargaining table.

Since Ayuk Tabe's arrest 18 months ago, some militias have been stepping up campaigns of violence, including kidnapping politicians and children.

The violence has scared Anglophone Cameroonians, many who have sought refuge in neighbouring Nigeria. The UN reports that some 1,800 people have been killed and 530,000 have been displaced since the conflict began in 2017.

Anglophone prisoners tortured
In related news, Human Rights Watch said Tuesday that Cameroonian government officials detained and tortured more than 100 prisoners after a jail riot on 22 July in Central Prison in Yaoundé. Those tortured include many from the Anglophone separatist Ambazonia movement, it added.

“The gendarmes put a piece of cloth on my nose and beat me. I was tortured like this, beaten badly several times on my legs and back," according to the HRW report that quoted a 37-year-old man from Bamenda, in the Anglophone area.

The people interview by HRW said that the riot kicked off because the prisoners were frustrated at the living conditions, overcrowding and court delays.

The report showed that some 100 prisoners were beaten by gendarmes and guards between 23 July and 4 August at the State Defence Secretariat facility.

Cameroon's Communication Minister Emmanuel Sadi said that they were being held “in line with legal procedure, with the utmost respect for the law."