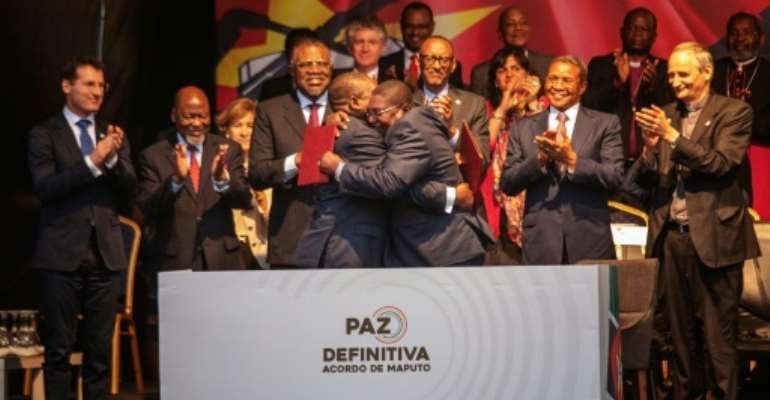 Mozambique's former rebel group-turned-opposition party Renamo on Friday said its members came under attack just days after the signing of a historic peace deal aimed at ending years of conflict.

Renamo spokesman Jose Manteigas said dozens of party members have been assaulted by police and members of the ruling Frelimo party across the country, adding that the attacks could threaten the landmark peace agreement.

He said Renamo members have been beaten and their houses and other properties torched in the provinces of Tete, Zambezia, Inhambane and Gaza, mainly in night-time attacks since August 8.

That was just two days after the much-hailed and long-awaited peace deal was signed by President Filipe Nyusi and Renamo leader Ossufo Momade on August 6.

"Unfortunately, contrary to the common desire for peace, national reconciliation, acceptance of different thinking and peaceful political cohabitation, two days after the signing of the Maputo Peace and Reconciliation Agreement, acts of violence and political intolerance were perpetrated by members of the Frelimo party, (and) police... in various parts of the country," Manteigas said.

"These macabre acts are politically motivated" and bring into "question the effectiveness of the agreement," he told reporters at the party headquarters in the capital Maputo.

He added that said senior Frelimo officials, particularly in the northwest of the country, have consistently prevented Renamo from carrying out political activities.

The allegations come just two weeks before campaigning begins for general elections on October 15 that Frelimo, the East African country's dominant political force for more than four decades, is expected to win.

After the country gained independence from Portugal in 1975, Renamo fought a brutal civil war against the Frelimo government that left one million people dead before fighting stopped in 1992.

Despite the end of the civil war -- and the group transforming into a political party -- Renamo retained an armed wing.

Fresh clashes then erupted again between government forces and Renamo fighters between 2013 and 2016.

However Renamo started disarming its armed wing late last month as part of the peace deal.