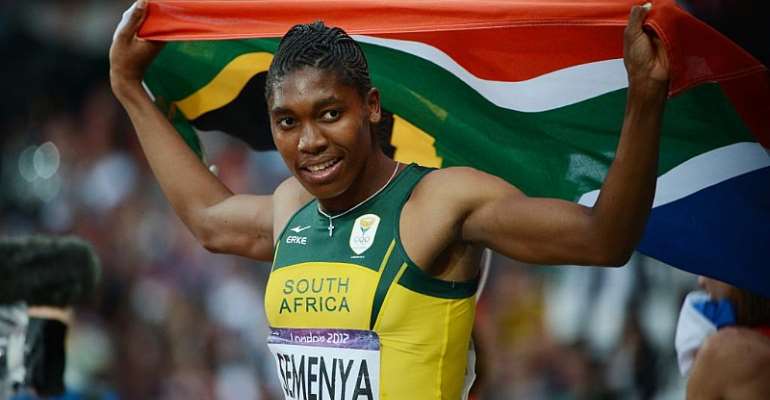 South Africa's two-time Olympic gold medallist, Caster Semenya, describes herself as tough and fearless – qualities she's had to rely on to persevere at the highest level of athletics while fighting rulings that threaten to derail her career.

“Athletics is my destiny. Something that fulfils me. Something that makes me feel free. At the end of the day, running fast doesn't come from genetics, it comes from working hard,” said 800-metre gold medallist Caster Semenya at the Top Women conference in Johannesburg.

She was sharing her views on empowerment with South African women, telling them how she became a world class athlete – albeit one surrounded in controversy over her naturally high testosterone levels.

New rules imposed by the International Association of Athletics Foundation (IAAF), which came into effect in May 2019, mean the South African runner will not be able to compete internationally without taking testosterone-reducing medication.

Also the current world champion, after another win in London in 2017, if Semenya wants to defend her title in September in Doha, she will now have to medicate to suppress her testosterone levels.

Semenya has appealed the ruling. She responded in a statement, declaring she would not be stopped.

"I know that the IAAF's regulations have always targeted me specifically," Semenya said. "For a decade, the IAAF has tried to slow me down, but this has actually made me stronger.”

The athlete has wide backing in her country, including from the government.

"The Cabinet fully supports Ms Semenya as she appeals and fights for her fundamental human rights. Like all other athletes, she is entitled to compete without being obliged to alter her body by any medical means," South Africa's Minister in the Presidency, Jackson Mthembu said.

The South African Sports Confederation and Olympic Committee decried the IAAF ruling, saying: "The rules are ill thought and will be a source of distress for the targeted female athletes".

IAAF and control
Addressing the Top Women forum in Johannesburg, Semenya spoke a lot about control: both the self-control she trained herself to achieve and also the degree of control the sports authorities want to impose on her.

“These guys were like, 'We're going to control this human being'. They tried, then they failed. How they failed, they don't know. Now they want to get rid of you… but they cannot get rid of you," she said.

Jermaine Craig, a veteran sports journalist based in Johannesburg, who has met Semanya, says she is an incredible athlete with a very strong temperament.

“The long and the short of it is, she is born a woman, she identifies as a woman and she has competed for many years on the world stage as a woman.

"I can understand the IAAF feels that she has an unfair advantage but forcing a woman to take medication to compete for a particular distance is inhumane and unfair,” Craig said.

As a girl, she used to play football with the boys but her gender was challenged because of her skills. The boys asked her if she was really a girl.

Her response: “One day, I walked naked into the changing room. That's when they realised 'Ah, she really is a girl, just more masculine, with a tough, deep voice'. They had fear because I could do things that they couldn't do.”

Tailor-made rules
Craig – who has over 20 years' experience in sports – says that he has never seen any other athlete endure the kind of treatment Semenya has had to face.

“It's unprecedented. It's preposterous. It's simply wrong the way they have treated her,” he says. “Look at Michael Phelps...he has abnormally big hands and feet, genetic advantages that aided his swimming.

“I understand that the IAAF has to impose particular rulings to ensure a level playing field for all athletes. But I don't think the answer here is penalising Caster Semenya.”

Semenya clearly agrees. “Whoever is going to stop me from running, he has to drag me out of the track…drag me out, you understand,” she told an applauding, enthusiastic audience at the Top Women conference.

“I'm in control. I'm the architect of my career. I'm the one who built my life. No one is going to tell me what to do in terms of decision making or running.”

Role model
Semenya has set up a foundation where she endeavours to “empower young girls and boys” and “build future leaders”.

“With us, it's very simple, we work more on basics. First, emotionally you need to bond with those kids. You need to know what they went through. Some of the kids that we know don't have shelter. Some don't have parents. Some need funds for school. Some have been molested,” Semenya explained.

Education is a priority for her foundation because “without education you will be nothing”. Semenya added that the foundation also work on discerning where the skills of the children lie. She insists that they need “to feel loved.”

Craig said that Semenya is “an incredible example and inspiration” to young women as well as young men.

“In our country, we've come from a difficult past. We fought hard to ensure that black and white are equal, as well as male and female. Caster comes from a very poor village in South Africa. She has become an incredible role model [showing that] you can go on to become an Olympic champion regardless of where you're from,” he said.