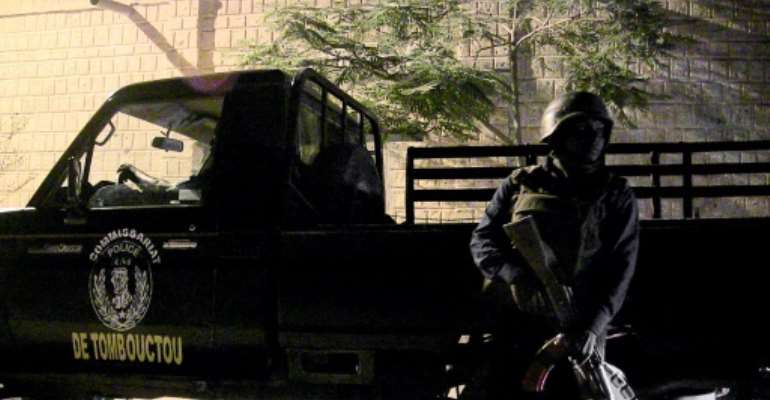 A Malian policeman stands next to a police car in Timbuktu during a joint patrol with UN peacekeepers in 2016. By souleymane Ag Anara (AFP/File)

Twin attacks in Mali have killed four people, including two Malian soldiers, security sources said Tuesday, as the International Committee of the Red Cross suspended activities in Timbuktu due to "growing insecurity".

A gendarme was killed in an ambush the Segou region, east of the capital Bamako on Tuesday, while at the scene of a robbery, a security source said.

A day earlier, two army trucks were targeted by an explosive device in the Koro area near the Burkina Faso border, in which a soldier and two civilians were killed, a senior army officer told AFP.

No one claimed responsibility for the attacks.

They were made public as the ICRC temporarily suspended its work in the northern city of Timbuktu following a carjacking at gunpoint close to the Geneva-based organisation's office.

"We ask for measures to improve security in town and in the region," said the head of ICRC's Mali delegation Jean-Nicolas Marti in a tweet.

In a statement, the ICRC said armed men stole one of its vehicles on Monday in the middle of the city and that several other thefts had happened in the region this year.

"This latest incident is symptomatic of the level of insecurity prevailing in the city and region, which has reached an unacceptable threshold for the population," the ICRC said.

Despite military help from France and the United Nations, Mali's government has struggled to quell the violence that began in the north of the country in 2012, sparked by radical Islamist and Tuareg militias.

They recruit mainly from among the Fulani -- primarily cattle breeders and traders -- and they have clashed with the Dogon and Bambara -- farmers who have formed their own self-defence militias.

Whole areas of the country remain beyond the control of Malian, French and UN forces.

JHS Not Increased To Four Years Or Reduced SHS Duration – Na...
36 minutes ago

We've Been Begging To Survive Over Closure Of Our Shops – N...
36 minutes ago