Now Boris is driving the Brexit bus, what happens next? 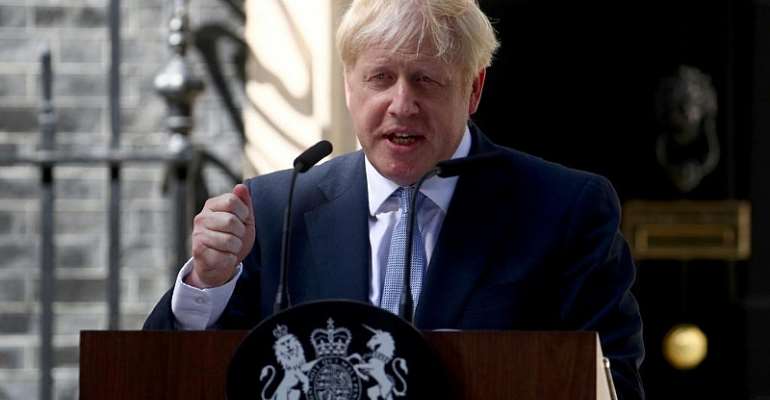 With only 3 months to the day that the UK is due to leave the European Union, the likelihood of a "no-deal" Brexit has increased significantly with the arrival of arch-Brexiteer Boris Johnson at 10 Downing Street.

Finance minister Sajid Javid announced the disbursement of an extra £2.1 billion (€2.3 billion) to prepare for leaving the European Union without an agreement on 31 October.

According to a government statement, the extra cash will be used to launch a public information campaign and "accelerate preparations at the border, support business readiness and ensure the supply of critical medicines".

The main opposition Labour Party have branded the move as an "appalling waste of taxpayers' cash" and said they would probe how the money was being spent.

Since taking office, Johnson has purged the British cabinet and replaced Theresa May's administration with hard-line Brexiteers. Does this change the stance of the European Union when it comes to Brexit?

"For the Europeans, nothing changes except that they're a bit fed up and would like to get rid of these Brexit negotiations. They have a lot of other challenges to focus on, but their line is till the same. There is a withdrawal agreement to be ratified by Westminster."

And indeed it has been made clear by the EU's top-brass such as Jean-Claude Junker, Donald Tusk and Europe's Brexit negotiator Michel Barnier that the deal reached and signed by Theresa May is not open for renegotiation.

Brinksmanship
Johnson has underlined that the UK will leave in three months' time, deal or no-deal. So that begs the question: has Brexit been reduced to a game of chicken between London and Brussels?

"Liar's poker," says Bertoncini. "They are playing their cards including the cards they don't have. Especially the no-deal, because if we look at the parliament in Westminster, there is no majority for a no-deal.

"Maybe the Europeans are also playing a sort of liar's poker. Maybe they could try and slightly modify the withdrawal agreement to let Johnson be able to say 'well look, I have obtained something,' even if it's symbolic."

And indeed, Boris Johnson's Brexit plan could become harder to enact as his Conservative party look set to lose the Welsh seat of Brecon and Radnorshire to a pro-European candidate on Thursday.

Victory for the anti-Brexit Liberal Democrats in Brecon would embolden those opposition MPs and some Conservatives who have pledged to do whatever it takes to stop such a no-deal departure.

Johnson has also been urging voters not to defect to Nigel Farage's Brexit Party, which has been capitalising on the political deadlock over Britain's departure from the EU.

So what really is more important for the Conservative Party? Delivering Brexit no matter the price or keeping the opposition at bay?

For Jeremy Stubbs, who heads UK Conservatives in Paris, keeping Labour under Jeremy Corbyn out of power takes precedence.

"Judging by opinion polls, keeping Corbyn out is even more important. But there's also a sense in which people believe that Corbyn keeps himself out," Stubbs says.

"If we understand the situation, Boris Johnson would never have been leader of the Conservative Party, I don't think, except for the tremendously successful result of Farage's Brexit Party in the European elections.

"Many Conservative MPs understand that the party would probably have been annihilated in the next general elections if they didn't have a strongly pro-Brexit leader."

Are UK elections on the cards?
So with exactly three months before the UK is due to leave the EU, deal or no-deal, could Britain go to the polls in such a short time window?

"The way I see it, there are four scenarios", says Stubbs. "Johnson negotiates with Brussels, it's ratified by parliament, we leave on 31st October. Everyone's 'happy'.

"Second scenario: He gets a deal, it's not ratified by parliament. He denounces parliament and organises an election. So that would be between now and Christmas."

And it doesn't get any better.
"Third scenario: He doesn't get a deal. We drift towards an exit with no deal. Parliament manages to stop us drifting out with a no-deal. Johnson again denounces parliament and calls an election. Again, before Christmas.

Market jitters and a media blitz
Meanwhile, fears that Britain is heading towards a disorderly split with its closest trading partner have sent the pound to new two-year lows against the dollar and the euro.

Johnson's no-deal cash boost will reportedly fund a Europe-wide media blitz, including adverts in major continental newspapers, aimed at convincing EU governments Britain is serious about leaving without a deal.

Some analysts have questioned how much of this £2.1 billion of funds are actually new and whether it could even be spent in the next 90 days before Brexit.

But beyond Halloween – deal or no deal – the European Union will still be standing. A new administration takes over the reins of the bloc, with Ursula von der Leyen succeeding Jean-Claude Junker as European Commission President.

So Brexit notwithstanding, what are the biggest challenges for the new EU administration when it sets up shop on 1 November?

"There are many challenges," says Yves Bertoncini, "but I would say it's looking at the world and making us stronger together. For example, to face migration challenges, collective security challenges from Russia to Islamist terrorism.

"You of course have the climate change crisis and more internally, economic and social cohesion – if not political cohesion, because we have seen that Europe is divided between the East and the West, the South and the North.