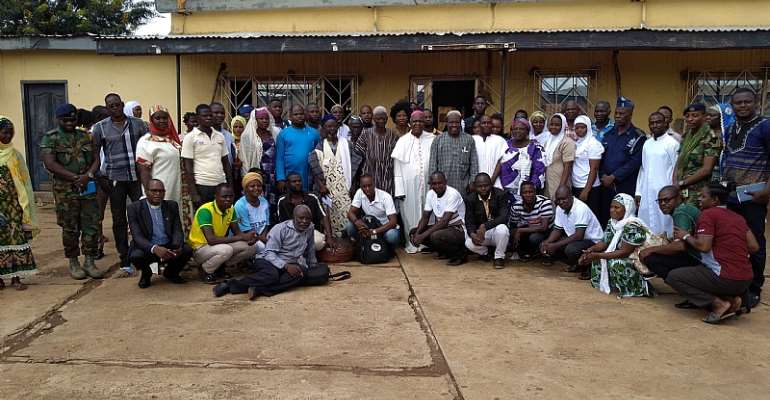 The Catholic Diocese of Yendi under the auspicious of the Justice and Peace Commission has organised a Town Hall Meeting on the theme: "Improving Sanitation Situation in Yendi Municipality; The Role of Assembly and Citizens" on Wednesday 17th July, 2019 at Yendi Community Center.

The Town Hall meeting organised, is one of series of programmes organised by the Catholic Diocese of Yendi under the leadership of Rev. Vincent Sowah Boi-Nai towards the development of Yendi Municipality.

The Town Half Meeting brought together stakeholders within the Yendi Municipality including: The MCE for Yendi; Alhaji Abubakari Yussif, Yendi Police Commander, Yendi Army Commander, Zoom Lion Coordinator, reps from NCCE and Sanitation Office, the Clergy, Imams, reps from Yendi Youth Parliament, reps from political parties and other interested parties.

The speakers on the event urge the public to manage refuge waste well to improve the sanitary situation in Yendi and to prevent the outbreak of insanitary driven disease.

The Catholic Bishop, Rev. Vincent Sowah Boi-Nai on his part, encouraged households to get toilet facilities in their various homes to curtail or reduce open defecation in Yendi which is a contributory factor of the current situation at hand.

The participants of the meeting applauded the Municipal Assembly and Zoom Lion for the gains made so far in that regard, and demanded more from them in order to improve the situation in Yendi.

They also suggested pragmatic measures Zoom Lion and the Assembly should put in place to achieve the long-aged goal to see the Sanitation in Yendi improved.