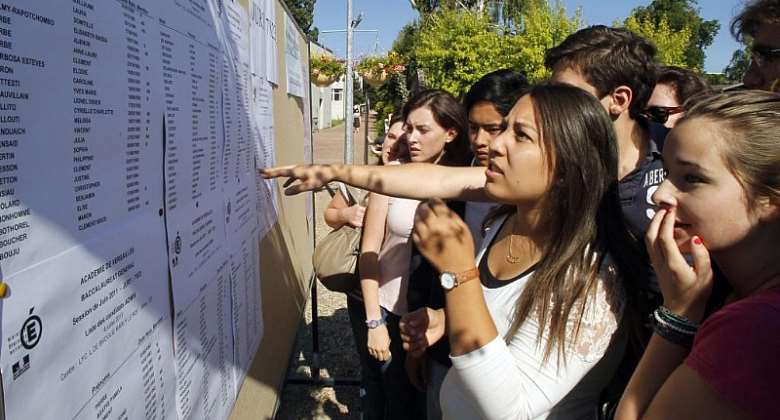 Today saw the release of the results of the French school-leaving exam, the baccalauréat. For the families of youngsters who sat the test, it's a crucial mark on the calendar. For some candidates, however, this year had an additional level of stress.

That's because 700 of the teachers employed to correct the papers went on strike, refusing to return the scripts in their possession, and also refusing to communicate the marks awarded to at least 80,000 of the four million answer books. The strikers say the figure is actually 126,000 papers.

In either case, that's a lot of worried kids.
The education minister has criticised the strikers as “saboteurs,” accusing “a tiny minority of trying to impose their own laws”. Some, he said, sounding just like my old French teacher on a bad day, “had far exceeded their rights and fallen far short of their obligations”. Voilà!

The minister was not short of a solution. Of sorts.

If your exam paper remains in the sweaty grasp of a striker, you will be accorded the mark you earned in the course of the year's continuous assessment at school. Should your exam paper eventually emerge and prove that you had, in fact, done better on the day than over the year, then you will get an upgrade so that you benefit from the best marks. Which seems fair, under the circumstances.

Minister may have missed the mark
A legal expert interviewed by Libération warns that the ministerial solution may not stand up, since all candidates are supposed to be tested and marked on the same basis. Egalité, as they say.

Some schools have already refused to play the game, withholding the results of any student for whom full official marks are not available.

And Frédérique Rolet, boss of the biggest union of French secondary school teachers, says the ministerial sidestep will mean that this year's results “risked being stained by unfairness”. What she really means is that she and her colleagues are angry.

Why?
There's a movement called “Bloquons Blanquer,” or “Let's block Blanquer” the target being Jean-Michel Blanquer, the French education minister.

He hopes to reform the entire secondary education system, starting when schools reopen in September. The teachers are worried.

Blanquer is a man in a hurry. He has a maximum of five years to make his mark. That's the length of a government mandate, with French education ministers tending to last an average of two school years. So the nation's top teacher will be doing well, if he lasts until September, his third year in charge.

Blanquer bashes on regardless
Blanquer has already swept his reforming hand through the republic's junior schools, cutting class sizes in difficult areas, and class sizes in general, making school obligatory for 3-year-olds. The prime minister recently said the education minister was doing a great job.

Now he has turned his attention to the secondary sector.

Blanquer has promised to “simplify” the baccalauréat, that fossilised monolith on which the whole French third level precariously balances. He wants to see teachers exercise more “authority”, focus on the fundamentals, encourage thinking outside the box, cross-fertilisation, give students more autonomy and help them to learn confidence. The parents have, for the most part, lapped it up. Especially right-wing parents. The teachers and their trade unions have denounced the minister as “hyperactive” and “a control freak”. They also condemn him for talking the talk . . . he's very good on the professional technicalities . . . but perhaps less good on the everyday classroom realities.

A profession of left-wing conservatives
He wants forced marriages for some schools and colleges in regions where student numbers are down; he wants to institute some form of testing for secondary teachers; he wants to re-examine the way private schools are, in part, financed by the state; he wants, irony of ironies, to abolish the bac . . . These are all touchy subjects. And teachers are notoriously conservative.

His proposals were savaged recently by the right-wing French upper house, the Senate.

No ambition, no dialogue, no consideration for teachers or parents, too technical and distant from everyday concerns were some of the criticisms voiced by the conservative senators.

And his colleagues in the centrist ruling Republic on the Move majority have criticised Blanquer's insistence on the French flag and the words of the national anthem being displayed in every classroom, accusing the minister of being too right wing.