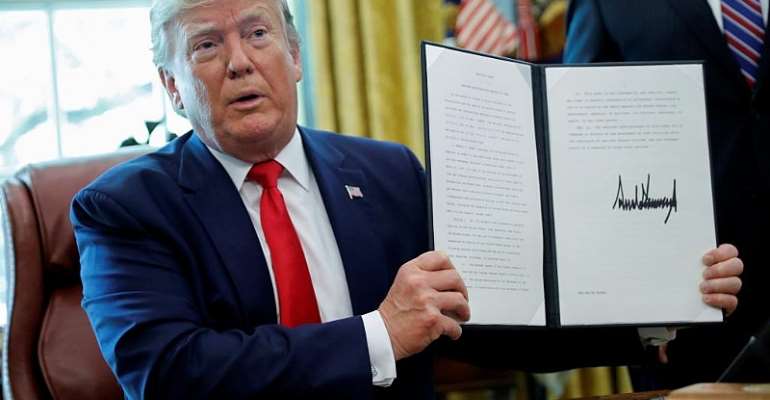 United States President Donald Trump signed punitive financial measures against Iran Supreme Leader Ayatollah Ali Khamenei and a number of military leaders, what the president said was a precursor to “obliteration” if Iran wages war on the US.

Trump said this was a “strong and proportionate response to Iran's increasingly provocative actions," referring to the US spy drone that Iran shot down last week. He had originally ordered a strike in retaliation, but then canceled it before it was scheduled to be carried out.

“We do not ask for conflict,” said Trump, saying that the sanctions could be cancelled depending on Iran's response, or they could be imposed for years.

The US Treasury said that the US will also blacklist Iran Foreign Minister Mohammad Javad Zarif in addition to the eight top commanders in Iran's Revolutionary Guards. The Treasury vowed to block “billions” more dollars in Iranian assets.

These sanctions are added to the existing ones that block most of its oil exports.

"Are there really any sanctions left that the United States has not imposed on our country recently or in the past 40 years?" said Iran's foreign ministry spokesman Abbas Mousavi. We... do not consider them to have any impact," he said.

Other countries, including Great Britain, Saudi Arabia and the United Arab Emirates have called on the two countries to find diplomatic solutions to this current standoff, as any major changes could affect global oil supplies.

French President Emmanuel Macron said he would call for "a constructive solution with the aim of ensuring collective regional security” when he speaks to his US counterpart at the upcoming G20 summit in Japan.

Iran says it does not have a nuclear program.
Critics of the US president say that he has repeatedly changed his mind in terms of how to handle Iran.

Under Trump, the US has backtracked on Iran policy. Although a breakthrough pact in 2015 with Iran allowed the country to develop its nuclear program for civilian use, Trump pulled out of the deal 2017, ramping up tensions between the two countries.

The United Nations Security Council is scheduled to meet later on Monday, at the behest of the US, to discuss the tensions between Iran and the US.

US Secretary of State Mike Pompeo was in the Middle East on Monday to meet travelled Monday to meet with Saudi King Salman and Crown Prince Mohammed bin Salman in Jeddah, Saudi Arabia to speak about what he called a "global coalition" against Iran. Pompeo was scheduled to also hold talks in the United Arab Emirates.

Akufo-Addo commences process to remove Anin-Yeboah over $5m ...
28 minutes ago