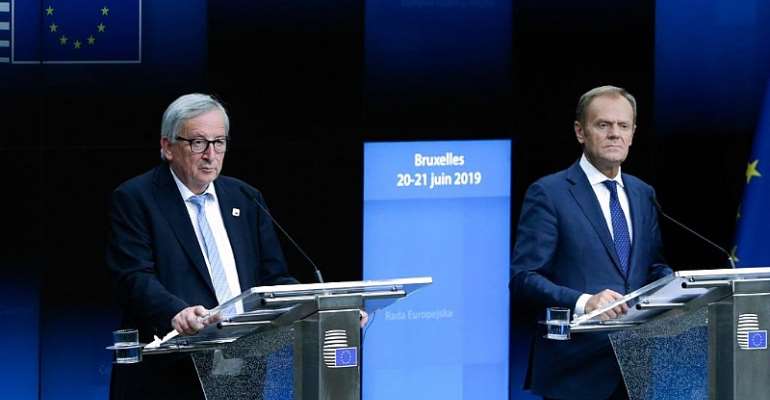 The 28 members of the European Union will meet on 30 June to choose new chiefs. They failed on Thursday to name successors for the four top jobs for the next five years. The Socialist group and the Liberal-Centrist group rejected the right-wing European Peoples' Parties (EPP) group's candidate, German Manfred Weber. Outgoing EU president Jean-Claude Juncker said wryly, "It is not easy to replace me."

The 28 heads of government met for dinner after Brussels' main political factions were unable to agree on a new head for the European Commission, the key leadership job.

Germany's MEP Manfred Weber had been the EPP's choice. The EPP holds the majority in the European Parliament.

Until they have done so, apppointments for the remaining important posts, EU Foreign Policy chief, speaker of the European Parliament, president of the European Council, have to wait.

Importance of EU elections
National leaders want to control the process and dole out the most senior jobs in a way that balances gender, east and west Europe, small countries and large.

Here's where the important role of European Elections comes into play. In May, the main conservative, socialist, liberal and Green parliamentary blocs  were forced to form a majority coalition, in the face of increased presence of extreme-right wing, nationalist and eurosceptic parties.

The main parties have not united behind any particular group of candidates.

How it works
The nominee for the Commission presidency must win the backing of least 21 of the 28 EU leaders and a majority in the 751-member parliament.

It's most likely that Juncker's successor will be an EPP member.

Renew Europe hopes to see a liberal replace Donald Tusk as president of the European Council, and the Socialists will provide a foreign policy chief.

The Greens could job-share the EU parliamentary speaker seat with the socialists, with each providing a speaker for two-and-a-half years.

Any other business, climate change?
The next steps to combat climate change was another issue that leaders failed to agree on unanimously on Thursday.

The 2050 target date for being "carbon neutral" was strongly opposed by coal-dependent Poland, Czech Republic and Hungary.

Greenhouse gas, CO2, emissions would be lowered to a point where green alternatives and compensatory actions would balance each other.

Green champions, France, Germany and the Netherlands led the charge for the goal to be set firmly.

We'll not accept the 4% salary increment — Coalition agains...
3 minutes ago