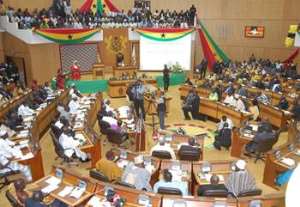 Ghana is in very serious trouble, and all that the Chairman of the country’s Parliamentary Foreign Affairs Committee can say in response to this dire emergency situation is to cluelessly call for his country’s media to keep mum, pretend almost as if the avalanche-paced takeover of Ghana’s otherwise beautiful and peaceful society by the patently unwise swamping of the country by some 7 million Nigerians, at the last count, is the most positive and progressive achievement that ever resulted from the inexcusably wrongheaded approach to Pan-Africanism and West-Africanism by President Kwame Nkrumah and our latter-day Nkrumacrats.

We are fast and apocalyptically losing our proud and civilized and rich heritage, and all that Messrs. Frank Annor-Dompreh, the Chairman of the Parliamentary Foreign Affairs Committee, and Samuel Okudzeto-Ablakwa, the Ranking Member of the Parliamentary Foreign Affairs Committee, can come up with, by way of a constructive solution to the problem, is to unwisely attempt to place a gag order on the media, even as Ghana’s unique and globally respected national identity is permanently and literally erased from the face of this Earth. Indeed, no such timorous response could be at once more irresponsible and suicidal (See “Cease the Negative Reportage on Nigerians – Parliament to Media” Modernghana.com 6/18/19).

At another time in the history of our country, Messrs. Annor-Dompreh and Okudzeto-Ablakwa, and all of their equally self-serving and pathologically myopic colleagues and associates would have had to be lined up and promptly and summarily executed by firing squad. What must be made unmistakably clear here is that any progressive and civilized country that has at least 30-percent of its total population composed of the nationals of just a single country, such as pertains to the present situation in Ghana, had better sit up or kiss the future survival of its younger generation and posterity the damnable kiss of death, now and forever more.

With a population of 7 million Nigerians out of Ghana’s approximately 30 million people, it is absolutely no wonder that these snooty Nigerians have been condescendingly and smugly preaching the effective ownership of our country. And then one begins to wonder what radical use indigenous Ghanaian citizens have for such lavishly caparisoned prominent and globally renowned and respected traditional Ghanaian rulers as The Asantehene, Otumfuo Osei-Tutu, II. I shall stop here on the doorstep of The Asantehene because for most of the 20 years that he has sat comfily on the globally celebrated Okomfo Anokye’s Golden Stool, His Majesty, Nana Osei-Tutu, II, has regrettably and regressively – my profuse apologies to both The Asantehene and The Asanteman Council – pretended as if his sole major or primary concern was Asanteman, whose original size, by the way, was ironically and tragically reduced to less than a third of its original geographical size by President Kwame Nkrumah, the legendary Pan-Africanism proponent of all time.

Now, Dear Reader, let me tell you what all the foregoing means. You see, having some 2 million Ghanaians resident in Nigeria means that the Nigerian leaders are far smarter and more intelligent and “visionary” than their Ghanaian counterparts. For, these 2 million Ghanaian migrants and immigrants barely represent just 1-percent of the total Nigerian population of some 200 million people, scarcely enough of a critical mass to pose any serious or significant threat to Nigerian culture, economy and politics. And I hope Messrs. Annor-Dompreh and Okudzeto-Ablakwa are not too visually impaired to recognize this most healthy fact. Now, compare the foregoing clearly negligible population size of Ghanaians living in Nigeria to the percentage of Nigerians, of 7 million, living among some 30 million Ghanaians. Now, does the latter state of affairs not pose a significant threat to Ghana’s survival and long-term cultural and economic self-preservation?

Couple the foregoing with Nigeria’s culture of relative violence and inordinate acquisitiveness – which, by the way, is the real reason and/or motive driving the recent high spate of such insufferably violent crimes as murders, rapes and kidnappings – and about the only most logical conclusion that any critically thinking observer could come up vis-a-vis the caliber of our leaders must definitely be that Ghanaian leaders, at least our parliamentarians, by and large, ought to be deeply psychologically unbalanced not to be alarmed by the dire implications of having 7 million Nigerians with a significant percentage or level of criminality occupying enough territorial space to easily constitute a nation all unto itself.