Kumasi-Aboabo Is an NDC Stronghold; Sammy Gyamfi, Stop Your Lies! 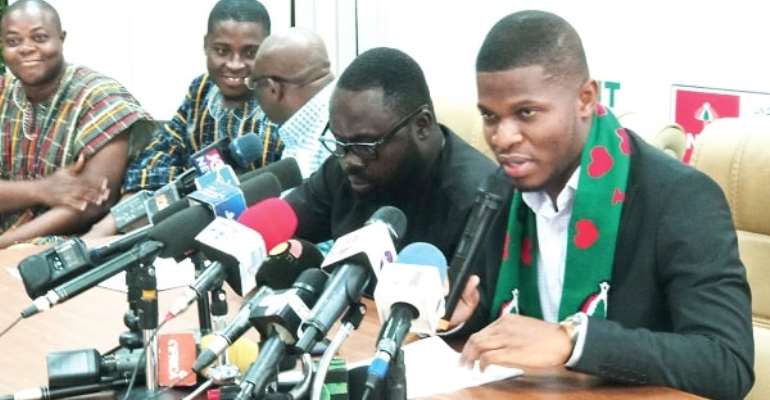 I could not keep myself from toppling off my chair several times, as I listened to the videoclip of a press conference hosted by Mr. Samuel “Sammy” Gyamfi, the so-called Communications Officer of the country’s main opposition political party, the National Democratic Congress (NDC). The videoclip, titled “Canadian Kidnapping: NDC ‘Exposes’ Real Identities of s…” and embedded into a news article captioned “Ghana’s Security in Total Disorder – NDC Alleges” (RadioGoldLive.com / Ghanaweb.com 6/15/19), has Mr. Gyamfi smugly claiming that the alleged ringleader of the arrested kidnappers of the two young Canadian white women NGO volunteers, who were reportedly rescued by a SWAT Team of the Ghana Police Service (GPS) in the Asante regional capital of Kumasi a couple of days ago, by the name of Mr. Seidu Yakubu (aka Mba), was an active and longtime operative of the ruling New Patriotic Party (NPP).

We must also quickly point out that as of this press preparation, there was also another news story, published by Peacefmonline.com, in which the former girlfriend of Mr. Yakubu is quoted to be denouncing the wicked attempt by the leaders of the National Democratic Congress to deny that Seidu Yakubu is a bona fide operative of the NDC. We shall momentarily examine and discuss the contents of the said article, which is captioned “Seidu’s Ex-Girlfriend Goes After ‘Wicked’ NDC for Denying Her Boyfriend.” We shall further examine the various competing narratives regarding Mr. Seidu Yakubu’s political affiliation and associations and then draw the most relevant and logical conclusions. We also need to quickly point out that just recently, former President John Dramani Mahama, who is also the 2020 Presidential-Election Nominee for the National Democratic Congress, publicly stated that the operatives of his globally infamous “Revolutionary” party were willing and ready to plunge Ghana into a drawn-out civil war, in the highly likely event of Mr. Mahama’s being roundly defeated by the incumbent President Addo Dankwa Akufo-Addo for the second time.

I have also just been whatsapped a photograph of Candidate John Dramani Mahama in which the latter and Mr. Seidu Yakubu are shown standing in the foreground of what clearly appears to be a very spacious parking lot, with Mr. Yakubu standing on the right-hand side of the former President, with a microphone directly standing in front of Mr. Mahama and what appears to be a longitudinally folded standard 8½” x 11” white sheet or sheets of papers in his lowered right hand, in what appears to be a public introduction of Mr. Seidu Yakubu. I mean, the last thing that any critically thinking Ghanaian citizen expects is to have a purportedly diehard operative of the ruling New Patriotic Party being apparently heartily being introduced by former President John Dramani Mahama at what well appears to be a massive outdoor gathering or even a political rally of National Democratic Congress’ party faithful and activists.

Anyway, in the videoclip referenced at the beginning of this column, we have Mr. Gyamfi, the NDC’s Communications Officer, playing an audiotape of a radio interview purportedly granted to the Kumasi-based Fox-FM, in which a voice alleged to be that of Mr. Seidu Yakubu is heard claiming to be a well-known and longtime member of the New Patriotic Party. We shall, in due course, discuss the full details of the press statement released by the so-called NDC’s Communications Officer, in which Mr. Gyamfi claims that the ringleader of the kidnappers of the two young white Canadian women is both the “errand boy” of Dr. Matthew Opoku-Prempeh, the Minister of Education and the New Patriotic Party’s Member of Parliament for the Manhyia-South Constituency, as well as the personal bodyguard of the Asokore-Mampong Municipal Chief Executive, Alhaji Alidu Seidu.

For now, suffice it to observe in passing that the Aboabo township of the Kumasi Metropolitan Area, where Mr. Seidu Yakubu has been publicly alleged to be operating from by the NDC’s Mr. Sammy Gyamfi, is traditionally the political stronghold of the National Democratic Congress, and not the stronghold of the ruling New Patriotic Party. In sum, our contention here is that it is highly unlikely for a man who is purported to be claiming to be a bona fide NPP member to be operating from a geographical and political position of great weakness or vulnerability. Such a strategic tack is simply unwise. We need to further probe the authentic political origins or affiliation of Mr. Seidu Yakubu. We, fortunately, find a more credible account of Mr. Seidu Yakubu’s political and/or ideological provenance in another news story posted on the Ghanaweb.com website captioned “Seidu Has Been a Criminal Since Infancy – Childhood Friend” (See KingdomFmOnline.com / Ghanaweb.com 6/14/19).

This second news story clearly appears to be the more credible of the two accounts, because the reported narrator of this second story is a woman going by only her first name, perhaps for security reasons. The childhood friend of Mr. Seidu Yakubu claims to have known the latter for the past 29 years or since the Fourth Grade or Class 4 from Dunkwa-on-Offin, in the Central Region. Maame Felicia, let’s just call our second narrator by this hypothetical alias, also tells us that Mr. Yakubu Seidu Mba’s given name at birth was Seidu Tambaya, and that the latter’s late father was widely known as “Uncle Abu” in Dunkwa-on-Offin. She also alleges that Mr. Seidu Tambaya or Seidu Yakubu Mba, the version presented by Mr. Gyamfi, the NDC’s Communications Officer, has been a notorious criminal almost since Mr. Tambaya was a toddler, and also that the latter dropped out of school in Fourth Grade.

But what is even more important and relevant to point out here, is the fact that Maame Felicia is reported to be saying that “Seidu is a diehard NDC [member] but was not actively used by the party for operations.” Maame Felicia does not explain to her audience the meaning of “operations,” as assumed and interpreted by the leaders of the National Democratic Congress. She also alleges that Mr. Seidu Tambaya/Seidu Mba at 12 years old, was already selling “weed/wee,” the official drug of choice of the key operatives of the National Democratic Congress, with his father, the late Uncle Abu. Unfortunately, Maame Felicia does not tell her audience the reason why the NDC kingpins never used Seidu Tambaya for party operations. It very well could be that the latter was not high up on the list of the party’s trusted foot-soldiers, which clearly appears to have been Seidu’s category of NDC membership.

There is also a clear hint here that at least at some point in time, Seidu Tambaya/Seidu Mba was a diehard member of the Mahama-led National Democratic Congress – as clearly indicated by the aforementioned photograph of the kidnap ringleader and former President John Dramani Mahama discussed above in this very column. Which undoubtedly vindicates evidence so far procured by operatives of the Criminal Investigations Department of the Ghana Police Service, strongly pointing towards the heavy involvement of key elements of the National Democratic Congress, including the indicted National Chairman of the National Democratic Congress, namely, Mr. Samuel Ofosu-Ampofo, who also once served as a Mahama cabinet appointee in charge of the Local Government and Rural Development Ministry, in the recent kidnapping of the two Canadian young white woman on June 4, or thereabouts this year, on exactly the same day that Chairman Jerry John Rawlings was delivering his 40 th Anniversary speech marking the Armed Forces Revolutionary Council’s most bloody intervention on an otherwise peaceful Ghanaian political landscape, and all national attention was diverted and focused on the same.

To be credible beyond any iota of the shadow of a doubt, Mr. Sammy Gyamfi has to publicly produce more than the clearly doctored faint voice of Mr. Seidu Tambaya/Seidu Mba, such as pictures or selfies authentically taken by the latter with either Dr. Matthew Opoku-Prempeh, whom Mr. Gyamfi claims has used Seidu Tambaya as his “errand boy,” or Alhaji Seidu Alidu, the Asokore-Mampong Municipal Chief Executive whom, the NDC’s Communications Officer tells us, has used or still uses Mr. Seidu Tambaya/Yakubu as his bodyguard. The good news here, of course, is the public promise by at least one kinsman of Mr. Tambaya’s family by the name of Sule(y), that the family of the widely alleged ringleader of the Kumasi Kidnappers are very prepared and eager to engage members of the general public in a conversation at their earliest convenience.