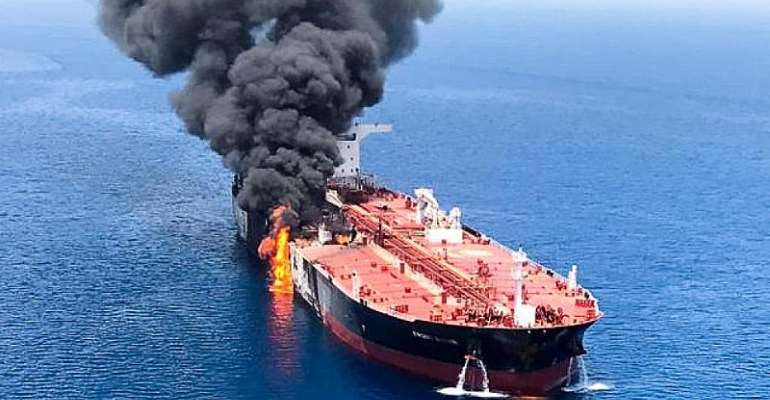 The United States called the attacks on two commercial shipping tankers in the Gulf of Oman on Thursday “unacceptable”, adding that it raises very serious concerns for global shipping and safety in the area.

"It's unacceptable for any party to attack commercial shipping and today's attacks on ships in the Gulf of Oman raise very serious concerns," acting US Ambassador to the UN Johnathan Cohen told a council meeting on Thursday.

Dozens of sailors had to be rescued after two oil tankers in the middle of the Gulf of Oman were attacked on Thursday. One oil tankers caught on fire during the attack of unknown origin.

UN Secretary-General Antonio Guterres told ambassadors at a meeting with the Arab League that a major confrontation in the Gulf must be avoided.

"I strongly condemn any attack against civilian vessels. Facts must be established and responsibilities clarified," he said.

Ships on fire in the Gulf
Norwegian maritime officials in Oslo said that three explosions occurred on “Altair Front”, a Norwegian tanker flying the Marshall Islands flag when it was attacked between the UAE and Ian at 6:03AM local time in the Arabian sea. They reported no crewmembers injured.

The 111,000-ton tanker caught on fire, it added.
The second ship, the Panama-flagged Japanese Kokuka Courageous, also caught on fire as the 21-member crew abandoned ship, but its operator Kokuka Sangyo said its methanol cargo is intact.

A number of countries responded to distress calls. The Bahrain-based US Fifth Fleet reported receiving two distress calls from oil tankers in the Arabian Sea.

Iran said it rescued 44 crew members from the two tankers. According to Allahmorad Afifipour, Port Authority director of Hormozgan Province in southern Iran, the fire o the Japanese ship was put out but they had struggled with the fire on the Norwegian ship.

Ongoing tensions in the region between the US and Iran have increased as this is the second attack in a month.

The US and Saudi Arabia had blamed Iran for the last attack, where mines were used on four tankers off the coast of the United Arab Emirates. Iran denies the allegations.

In Paris, the French Ministry of Foreign Affairs spokesman said “all actors concerned” must practice “restraint and de-escalation.”

A spokesman for the Saudi-led coalition against the Yemeni Iran-aligned Houthis claimed the attack came from the Houthis.

"From my perspective ... we can connect it to the Houthi attacks at Bab al-Mandeb," Colonel Turki al-Malki told reporters in Riyadh, referring to the attacks on two Saudi oil tankers in July 2018 that The Kingdom blamed on the Houthis.

The UN Security Council will be holding a closed-door meeting later Thursday on the attacks in the major sea lane in the Gulf.