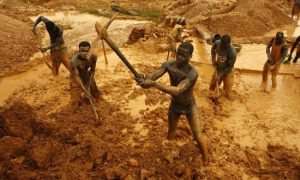 The unfortunate vineyard news spiralling through is that the lunatic fringe of the illegal miners are back in business, following the lifting on the ban on small scale mining.

In the ongoing fight against the obdurate illegal miners amid existential antagonism and social restiveness, there has been an overwhelming support for militarisation.

And, given the criminal intent of the vast majority of the galamseyers, we are, more than ever, urgently required our military power to combat the menace of the impenitent nation wreckers who are bent on stealing our natural resources and destroying the environment.

In theory, the illegal miners invasion of our country side with a view to forcibly digging our mineral resources, polluting our sources of drinking water, destroying the environment and above all terrorising the natives is tantamount to war.

I will, therefore, venture to stress that if we failed to sustain the fight against the seemingly insuperable illegal mining war, we risk a possible conflict between the incompliant galamseyers and the state.

The United Nations asserts that in the last 60 years, at least 40 per cent of all intrastate conflicts have a link to natural resources and that this link doubles the risk of a conflict relapse in the first five years (UNEP, 2017).

The United Nations stresses that since 1990, at least 18 violent conflicts have been instigated by the exploitation of natural resources, whether ‘high-value’ resources like timber, diamonds, gold, minerals and oil, or scarce ones like fertile land and water’ (UN, 2017).

It was against such backdrop that the United Nations went ahead and mandated a few peacekeeping missions with a view to helping the host country to prudently manage its natural resources.

One such example is the 2003 UN Resolution 1509, which sought to help the war thorn Liberia to protect its natural resources from illegal miners (UNEP, 2017).

The other UN mandated peacekeeping mission is the 2010 Resolution 1925, which aimed to protect life and property in the Democratic Republic of Congo (UEP, 2017).

Let us therefore remind ourselves that Article 1 (2) of the United Nations International Covenant on Economic, Social and Cultural Rights is emphatic on self-determination and the ownership of natural resources.

It emphasises: “All peoples may, for their own ends, freely dispose of their natural wealth and resources without prejudice to any obligations arising out of international economic co-operation, based upon the principle of mutual benefit, and international law. In no case may a people be deprived of its own means of subsistence” (UN 1966).

In effect, under no circumstances whatsoever, should any country and for that matter, a citizen of such country, choose to trample upon the inviolability of one’s sovereignty.

And more so Article 9 of the 1993 Vienna World Conference on Human Rights affirms that “least developed countries committed to the process of democratization and economic reforms, many of which are in Africa, should be supported by the international community in order to succeed in their transition to democracy and economic development.”

Strangely, however, in spite of the fact that by law, only Ghanaians are allowed to obtain mining licenses for small-scale mining operations, “thousands” of Chinese and other foreigners are working in the small scale mining sector in Ghana.

“The involvement of the Chinese has changed the dynamics of small-scale mining,” the head of the Ghana Chamber of Mines, said in an interview.

“They use bulldozers, pay loaders and really heavy machinery. They have in fact mechanized artisanal mining and as a result the level of environmental devastation is huge.”

Regrettably, some incompliant Ghanaians have been violating the small-scale mining law over the years without the corresponding punishment.

Credible sources have it that often, Ghanaians would secure plots of land and then go into partnership with the Chinese and other foreigners who have funds to bring in the bulldozers and all the other big equipment.

Suffice it to state that the licensed Ghanaian small scale miners often take advantage of the lapses in the 1989 small-scale mining law (PNDCL 218).

Take, for example, the law states categorically that no licence for small-scale gold mining operation shall be granted to any person who is not a citizen of Ghana.

Strangely though, the same law allows a Ghanaian licence holder to seek logistics assistance from their foreign minions.

As a result, some Ghanaian licence holders would more often than not, go beyond the stated jurisdiction and involve the foreigners in the mining operations.

Let us be honest, the monumental loopholes in the small-scale mining law go to show that the law is not innovative.

It is, however, true that potential economic benefits (employment, tax revenues and development outcomes) can be derived from small-scale mining sector in Ghana.

In addition, the effective implementation of regulations and fortifications towards the developmental potential of the sector must be the topmost importance to the regulating authorities.

The positive effects include the extraction of ores from small deposits or from tailings which provide the rural folks and other small scale miners with sustainable incomes.

However, on the preponderance of probability, the negative effects outweigh the positive effects, and therefore it was prudent for any serious, committed and forward-thinking leader to put tabs on the activities of the unscrupulous illegal miners.

Let us admit, they, the scumbags, are well -prepared and they routinely carry out their illegal activities with military precisions, and can strike as lighting, and as deadly and destructive as molten magma.

In addition to stealing our natural resources, the illegal miners are gleefully polluting our sources of drinking water with noxious mercury and cyanide. How bizarre?

“Unlike some other West African countries, Ghana allows mercury use in mining. Mercury is freely available in shops and can be bought with a canister, bottle, or as a ball wrapped in a plastic cling film. Much of it has been brought in by Chinese miners.

According to the World Health Organisation (WHO), exposure to mercury – even small amounts – may cause serious health problems, and is a threat to the development of the child in utero and early in life.

And, what is more, WHO insists that mercury may have toxic effects on the nervous, digestive and immune systems, and on lungs, kidneys, skin and eyes.

Worryingly, however, mercury is considered by WHO as one of the top ten chemicals or groups of chemicals of major public health concern.

WHO explains that people are mainly exposed to methylmercury, an organic compound, when they eat fish and shellfish that contain the compound.

Moreover, WHO suggests that the primary health effect of methylmercury is impaired neurological development.

Therefore, cognitive thinking, memory, attention, language, and fine motor and visual spatial skills may be affected in children who were exposed to methylmercury as foetuses (The condition is also known as the Minamata disease).

“Symptoms include ataxia, numbness in the hands and feet, general muscle weakness, narrowing of the field of vision and damage to hearing and speech. In extreme cases, insanity, paralysis, coma and death follow within weeks of the onset of symptoms. A congenital form of the disease can also affect foetuses” (See: www.bu.edu/sustainability/minamata-disease ).

As a matter of fact, better data and policies are needed to get the sector back on track. So, going forward, the mining laws have to be looked at again and if possible amended or scrapped altogether.

However liberal we would like to portray ourselves to the whole world, we should not, and cannot continue to sit aloof and allow the stubbornly impenitent illegal miners to hijack Ghana’s natural resources.