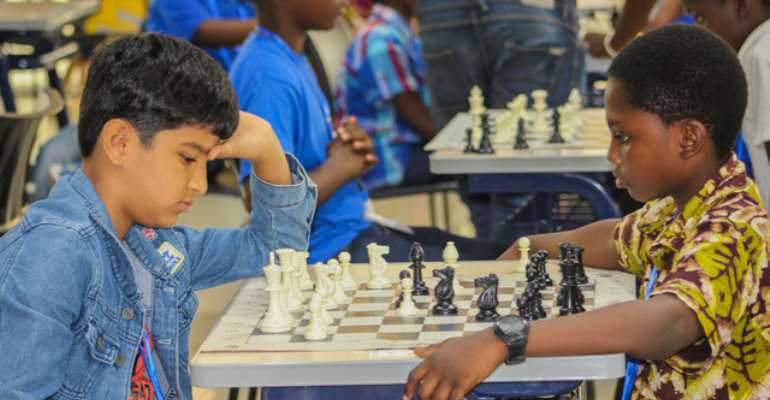 The second edition of the National Youth Chess Championships was held on Saturday, June 8, 2019, in DPS International Ghana at community 25 Tema. The students of DPSI displayed their skill in Playing chess and winning four medals.

Four students from DPS International that hosted the Championships - picked medals each in the U18 category.

In all, 18 students from DPS International's Chess Club participated in the Championships.

Majority of the 18 students from DPS International put up great performances up to the fifth round of the competition and walked away with certificates of participation.

A total of 10 schools participated in this year's Championships.

The prizes given to each winner for the Championships were sponsored by Indian philanthropist and Director of DPS International, Mr. Mukesh Thakwani.

DPS International, it would be recalled, hosted the maiden edition of the competition in 2018 too.

The Principal of DPS International, Mr. David Raj, speaking at the event on Saturday, said he appreciated the tremendous efforts that were put into the Championships by the participants, hence the decision of the School's Director to sponsor the awards.

He said the prizes which included trophies, medals, among others, were aimed at encouraging the students to keep up the spirit of the game of chess.

The awards were presented to winners and participants in general by Mrs Tanya Thakwani.

Mrs Thakwani was assisted by Mr Raj, and Vice President of the Ghana Chess Association, Christiana Ashley, in presenting the awards.

The Head of DPS International's Chess Club, Hardik Trivedi, told the journalists that his students who participated in the competition were also good in their academic performance.

He said that DPS International gives priority to extracurricular activities in order to strike a right balance between scholastic and nonscholastic activities. All round development is the hallmark of the school and they make concerted efforts to help each student emerge as an all-rounder by imparting quality education.

About DPSI Ghana
DPS International Ghana was founded in September 2010 by renowned Indian industrialist and philanthropist, Mukesh Thakwani, under the aegis Delhi Public School a chain of schools all around the globe known for its holistic education.

Mr Thakwani's mission is to champion the cause of education in the West African sub-region, by providing a world-class educational system.

DPS International Ghana is affiliated to the University of Cambridge International Examinations and Central Board of Secondary Education, New Delhi (CBSE).

ASEPA to sue Presidency for withholding info on petition for...
21 minutes ago