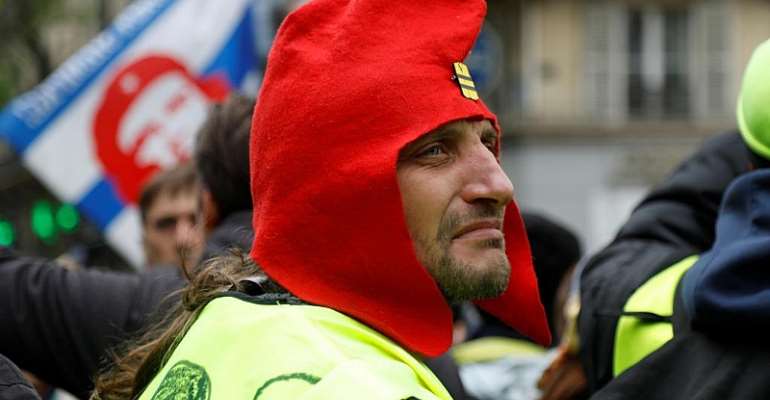 The 30th consecutive Saturday of 'Yellow Vest' protests takes place toeday, Saturday, in the suburbs north of Paris from the stadium at St Denis to Bobigny. A second rallying point was announced on the chic Left-Bank inside Paris city not far from the Eiffel Tower.

Supporters of the anti-government movement hotly debated the choice of venues on social networks and whether they could stir more militants.

The 'Yellow Vests' who began their protests in November 2018, have seen their numbers dwindle country-wide.

Edouard Philippe's government agreed to their initial demand to cancel a fuel hike soon after the first rallies.

However, the anger was only just beginning to find its voice, and the peaceful protests over a range of social and economic issues, were followed by violence.

Change of venue
The choice of the northern suburb, Seine-Saint-Denis, for the 30th consecutive demo was an odd idea for some anonymous commentators on Demosphere, which describes itself as an alternative information site.

Some want the protestors to defy the authorities' ban on demonstrations in the Champs-Elysées, the smart shopping avenue which extends from the Napoleonic Arc de Triomphe and attracts millions each year.

Others insist they should hold anti-capital, anti-president Macron rallies outside big banks or international financial institutions.

The idea that the 'Yellow Vests' could swell their numbers by taking their protest to suburbs was equally welcomed and criticised on the site.

Support came from those who hope that more people would take action to express discontent if the demonstrations were held near where they live. Others however disagreed because they say, the less pretty suburbs fail to attract attention.

Local authorities, like the City Hall in Caen in Normandy have like, the Paris Police, started banning town-centre protests. According to the local press, only a few hundred, as against thousands in the past, have turned out.

More sensational
Earlier this week, the Paris prosector called on courts to hand Eric Drouet, one of the 'Yellow Vests' who has gained notoriety, a €500 fine and four-month suspended jail term.

He has been found guilty of taking part in a demonstration without it being registered with the police, and for having a sort of truncheon in his bag at the time.

The 34 year-old truck driver was arrested on 22 December 2018 in central Paris in the midst of a group of protestors.

The sentence will be pronounced on 4 September.
Government maintains course
The French government meanwhile, is working hard to put the finishing touches to their reform of the unemployment benefit system. Talks between government and unions collapsed in the winter. Two weeks from now the government is due to unveil its new plan.