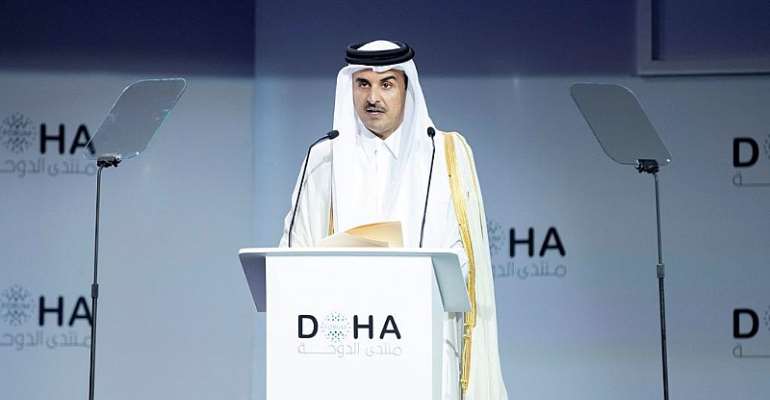 The tiny Arab peninsula of Qatar enters into its third year of a massive economic blockade as neighbouring Arab countries and their allies continue to accuse the peninsula of a number of things, including hostile reporting by Qatar-based Al Jazeera TV station, interference in internal political affairs, and support for terrorism.

“The main reason was Al Jazeera, which reported in a very critical way about authoritarian developments in Saudi Arabia, in Egypt, in the United Arab Emirates and Bahrain, those four countries which signed the boycott of Qatar,” says Günter Meyer, director of the Center for Research in the Arab World at the University of Mainz.

The diplomatic crisis started in June 2017 when Bahrain, Saudi Arabia, the United Arab Emirates (UAE) and Egypt, supported by other countries, including Mauritania and Yemen, cut or downgraded diplomatic ties with Doha.

But there are deeper rifts.
“The politician differences stem from Qatar supporting the Muslim Brotherhood,” says Meyer, the organisation that represents political Islam, “extremely dangerous for the political system in the other four authoritarian Arab regimes.”

The blockade drove Qatar into the arms of Turkey, another supporter of the Muslim Brotherhood.

Both countries are working together, fighting the anti-Qatar coalition in proxy-operations, such as in Libya, where Egypt and Saudi Arabia back the rogue general Khalifa Haftar while Doha and Ankara support the government in Tripoli.

And then there is Iran.
Qatar has a loose military cooperation with Tehran, and the countries jointly operate a gas field in the Persian Gulf.

“The rivalry, the political tension between Saudi Arabia and the UAE which is supported by Bahrain and Egypt towards Iran is really a bone of contention,” says Meyer.

“Qatar tries to mediate between these two positions,” something which is “not acceptable” by the Saudis.

The anti-Qatar coalition presented a list with 14 demands that included stopping Al Jazeera's critical broadcasts, and stepping away from Iran. But in its turn, Qatar rejected the list.

Qatar's camels suffer, too
When the blockade kicked in, many Qatari were “shocked”  -- there was a run on food supplies. But this situation was quickly controlled, partly thanks to help from Turkey.

But Qatar's air industry was severely hit when Saudi Arabia closed its airspace and many flights, especially the European corridor, was off-limits and travelers to and from Doha were forced to make long detours.

Those who suffer the most are probably Qatar's camels. Since the border with Saudi closed, herds cannot freely roam the desert areas between the two countries anymore. Saudi plans to dig a canal along the borderline, turning the country into an island may ring the death knell for overland travel.

“They are no longer able to part from one country into the other. In many cases the huge herds of camels could not reach return to Qatar,” says Meyer.

Football on the horizon
At the moment it is not clear how the current blockade of Qatar will impact its capability to successfully organize the 2022 Football World Championships.

Last week, Qatar's Prime Minister Sheikh Abdullah bin Nasser al-Thani visited an emergency summit in Mecca to talk about security in the region and Saudi concerns about what it calls Iranian “interference.”

According to Meyer, the visit is “a tiny step forward and shows that there is not an absolute blockade.”

Meanwhile, he thinks Saudi attempts to influence Qatar's organisation of the 2022 World Football Championships won't amount to much.

“It is a very prestigious event. I don't think that Saudi Arabia, but also Egypt, would miss this chance to participate in the World championships,” he says.