GCB Profit, Deposits And Asset Base Go Up In 2018 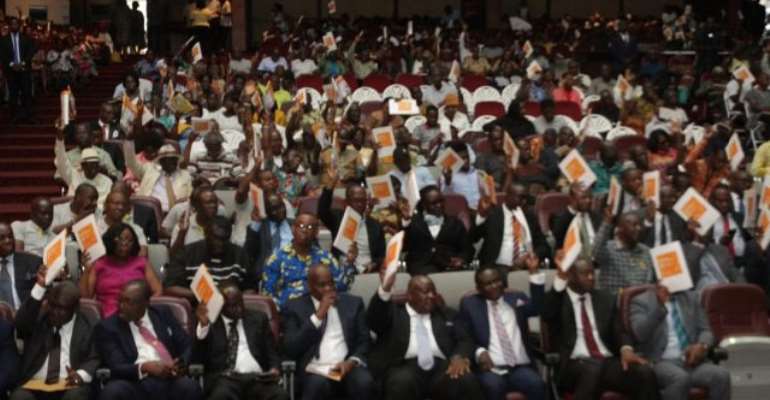 GCB Bank Ltd has recorded a ¢1.38billion increase in total deposits from ¢6.92 billion in 2017 to ¢8.30 billion representing a 19.6 percent growth in 2018, this makes GCB the number one Bank in Ghana in terms of deposits and asset size.

This was announced at the 25th Annual General Meeting (AGM) organized by the Bank to consider and adopt the financial statement of the company for the year 2018.

The event, which was attended by shareholders of the Bank as well as the media, took place at the Accra International Conference Centre (AICC).

The Chairman of the Board of Directors of GCB Bank, Jude Kofi Arthur, announced other significant gains the Bank made in the year under review.

This impressive profit performance, which was driven by solid revenue growth, has resulted in an increased dividend which he announced to the delight of shareholders.

“Accordingly, we propose a dividend of 30 pesewas per share amounting to ¢79.50 million for the 2018 fiscal year.

“The increase in the dividend was attributed to the growth in the Bank’s basic earnings per share which grew from 0.89 pesewas in 2017 to ¢1.23 in 2018, representing a growth of 38 per cent,” he declared.

The amount, which is payable by June 17 to all shareholders who are registered with the Bank, represents a 200 per cent increase over the 2017 dividend, which was 10 pesewas per share.

Expressing optimism about the future performance of the Bank, Mr. Arthur announced plans to introduce a mobile wallet as part of strategies on transformation through digitization aimed at accelerating growth through the provision of first class banking solutions for its customers.

Shareholders of the Bank commended the Bank for demonstrating effective leadership in the banking sector and for improving its performance in the year under review.

Joseph Allotey, a shareholder of the Bank, commended the board for spurring the Bank on to success in spite of the difficulties the Banking sector was faced with last year.

“I want us to all clap for the Board for leading the Bank to make such great profit last year. Times were hard because of the Banking crisis but GCB has come out strong.

“We are grateful to all the staff for working hard in the past year. We know that the coming year will see much better results,” he applauded.

The appointments of some directors of the Board namely, Alhassan Adam Yakubu and Prince Edward A. Young were ratified while other directors namely, Nik Amarteifio, Emmanuel Ray Ankrah and Nana Ama Ayensua Saara III, Queen Mother of Denkyira were re-elected.

In 2018 alone, GCB Bank Ltd, Ghana’s most welcoming Bank supported the country in the areas of health, education, environment and sanitation with a focus on its operational communities through several CSR activities to the tune of ¢5.62 Million.

Hinting on the challenges in the past year, the chairman mentioned the high cost of operations as a major challenge to the Bank as it posted a cost-to-income ratio of 60.5 percent, which was well above the industry average of 53.5 percent.

“Adequate measures have been put in place to ensure that our cost-to-income ratio falls below the industry average,” he assured.