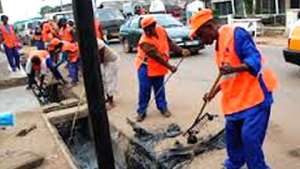 Akufo-Addo's government has renewed its street sweeping contract with Zoomlion following advice from the Attorney General.

As a result, the government continues to pay the 38, 000 sweepers under the Sanitation Model of the Youth Employment Agency monthly.

Speaking to Joy FM on Thursday, the Chief Executive of the YEA, Justin Kodua Frimpong told Joy FM that the advice from the Attorney General was necessitated by a protest letter from the sanitation company when it got a hint of government’s intentions to review its contract.

The said letter was reminding the government of its contractual obligations to Zoomlion and warning of liabilities should it go ahead with its planned abrogation.

It is true the government was intending to review the contract of Zoomlion following anomalies identified with the execution of its obligations.

According to Mr Kodua Frimpong, some of the anomalies included the monopoly enjoyed by Zoomlion.

Again the Youth Employment Agency could not account for the monies that were being paid to Zoomlion since they were paid directly from District Assembly Common Fund, he said.

The 45,000 employees under the model could not be independently verified by the agency.

Also, the agency considers it impropriate that employees were being paid Ghc 100 a month while the company kept Ghc 400 from the total of Ghc 500 received from Government.

The YEA boss also said that there was no proper documentation covering the dealings of the sanitation company with the government.

Even worse, the Youth Employment Agency was not part of recruitments done under the model, neither were they contacted to verify claims for payment made by the Zoomlion on the government. Frimpong said

According to Mr. Frimpong, Zoomlion argued that the government could review its contract without suffering liabilities and paying all indebtedness owned it.

The Attorney-General has confirmed this, he said.

According to the advice of the Attorney General, the actions of government and the sanitation company suggested that a contract existed between the two parties even though a formal contract between the two expired as far back as 2013.

According to the boss of YEA, the fact that the previous contract which dates back to 2006 had renewal clauses and was not terminated officially but the government allows the company to work when its contract expired in 2013 makes government a party to the contract with the company.

However, the government has instituted a number of reforms to ensure that its current relationship with the sanitation company is not fraught with the previous anomalies.

Government has instituted a number of measures to ensure value for money. Justin Kodua Frimpong has claimed.

One of the measures includes paying the sanitation company for 38, 000 employees instead of 45,000 employees claimed by the company. This was arrived at after a head count.

In addition, the government has ensured that employees now receive a monthly payment of Ghc180 instead of the Ghc100 they received previously.

Government is also breaking the existing monopoly which Zoomlion enjoys. It has gone ahead to advertise for other companies to come onboard.

In the next six months, other companies are expected to come on board after the public procurement authority finalized all necessary protocols. Frimpong said.

Cabinet has also constituted a subcommittee to review the entire contract of Zoomlion.