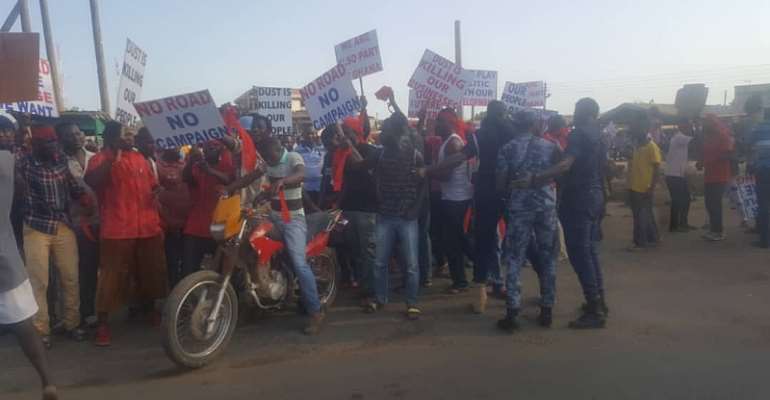 Aggrieved residents of Dawhenya in the Ningo-Prampram District of the Greater Accra Region, who demonstrated over deplorable roads in the area recently, have asked the Member of Parliament (MP), Samuel Nartey George, not to come near them in the next protest against government.

Last Friday, scores of residents in Dawhenya in the Greater Accra Region took to the streets to protest against deplorable road from Dawhenya to Afienya, among others.

They burnt lorry tyres and blocked the road with wood and metal containers to register their displeasure.

The angry residents bemoaned the neglect and unfulfilled promises by successive governments.

After the protest, the Member of Parliament (MP) for Ningo Prampram, expressed his readiness to partake in the next protest after the expiration of the 14-day ultimatum given to government to fix the deplorable roads.

Speaking to Citi Fm on Friday, Mr. George disclosed that “in two weeks' time, I will join the members of my constituency, because Parliament is on recess and I have exhausted all my parliamentary options.

“That road has transcended the government from the NDC to the NPP. That road has been in a state of disrepair for over 20 years.”

“We only want to send a message to the government to ensure that the road is fixed and no politics attached. There are other pressing issues that the MP can channel his energy into than joining us.”