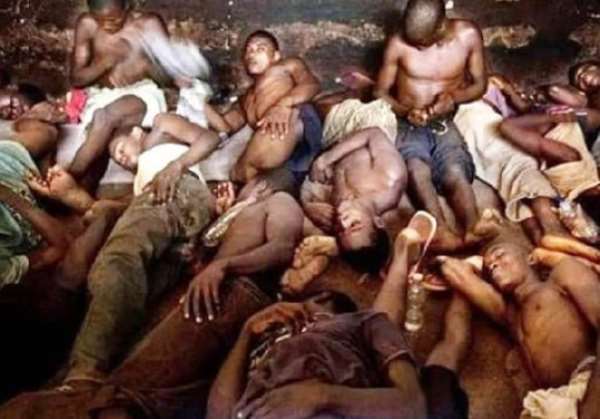 Many have raised preliminary concerns on how over the years the prison system haven't received any major facelift vis a vis the overcrowding of inmates. Unlike other jurisdictions, where their system allows for community sentence for offenders of misdemeanor or other related minor crimes to offer community service other than receiving Custodial sentence which in a way decongest the population of the inmates. Unfortunately, if not all, most of our criminal adjudicating system is Custodial inclined hence, congestion at the already built prison rooms with little or no expansion at all.

The health hazard on both the officers and the inmates are obvious; outbreak of communicable diseases. ASP Joham Nartey lamented the plight they go through in terms of handling overcrowded inmates. He revealed the total inmate population at the Sunyani Prison is about 847 instead of the actual capacity of 450 inmates. According to the accounts of ASP Joham Nartey, expansion of existing structures have been stagnant over the years and for the past seven years inmates still feed on Ghc1.80pesewas daily.{Ghanaweb}

Modern Ghana publication on February 2010 indicates that Sekondi Prison 5×7 room had a total of seven convicted inmates cramped up with only three student like beds serving the total inmates. It reiterated that, the remand camp had about 32 to 60 remand inmates cramped up in 16×5 room. Inmates' statistics on www.ghanaprisons.gov.gh currently reveals that overcrowding percentage of inmates in Ghana is 46.50%.

The #ExpediteCustodialSentenceBill# campaign is an appeal to the legislature to fast forward the bill presently before them, that's intended to address this canker, that seems to stampede the fundamental rights of these inmates in terms of article 15(2)(a-b) of the 1992 Constitution as well as a clear cut policy on feeding allowance for inmates other than the current Ghc1.80p, provision of resources and logistics to help in the re-integration process, expansion of infrastructures and enforcement of the law should the exact number of inmates exceed, provision of Community Sentence, and other provisions that shall be considered by the Legislature to help curb this abuse of human dignity.

Latest Photo Reports
Catch up with all the political quotes from our politicians.
Advertise here
More Critics
ModernGhana Links
Another episode in Ghanaian faux outrage: The case of the Do-or-die Affair
Corruption Fight: 78% of Ghanaians not confident in Akufo Addo rather than CDD's 62% - Economist claims
The Speaker Of Parliament Is Protecting His Position Not The Laws Of Ghana
Who are Frontiers Healthcare Solutions Services Limited at Kotoka International Airport? Who owns this company?
Nsein Traditional Council Have No Idea Of Afeku's 200k Kundum Expenses
You've Started Sod-Cutting Since Time Immemorial Yet, You Cannot Boast Of A Single Hospital
NDP: Akufo-Addo’s Agenda 111 – The Biggest Scam of the Century
What A Shameful Appeal!!! Nana Addo Should Use The Money His Wife Refunded To Build The National Cathedral
NDP Note on Presidential Overspending on Travels
TOP STORIES