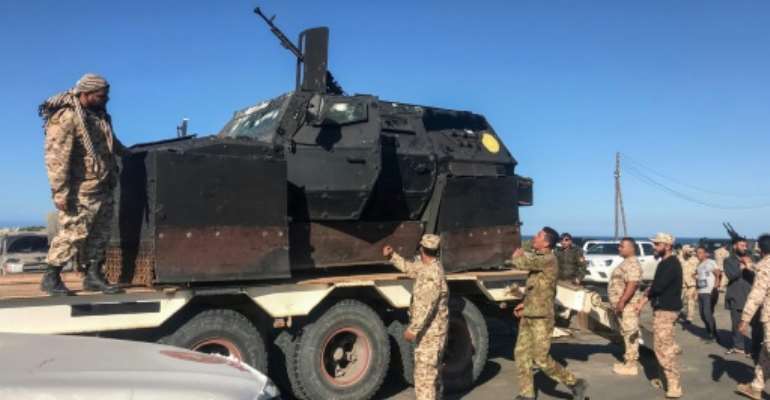 Dozens of armed vehicles were gathered Saturday in Tajura, in the suburbs east of Tripoli. By Mahmud TURKIA (AFP)

The head of Libya's UN-backed government Fayez al-Sarraj on Saturday accused his rival Khalifa Haftar of betraying him over a military offensive against the capital Tripoli which risks plunging the country into civil war.

Forces loyal to the Libyan commander have pressed on with their assault despite international calls to halt hostilities.

In a televised address, Sarraj warned of a "war without a winner".

"We have extended our hands towards peace but after the aggression that has taken place on the part of forces belonging to Haftar... he will find nothing but strength and firmness," he said.

Pro-Haftar fighters have been slowed in their advance by forces loyal to Sarraj's Government of National Accord (GNA), which is based in the capital.

Pro-government forces in Tripoli confirmed they had targeted Haftar's men with "intensive strikes".

The air strikes came as fresh fighting flared Saturday south of Tripoli between the pro-government forces and Haftar's troops despite calls from the international community to halt the military offensive.

Several European foreign ministers warned Haftar not to countenance any further military action, with France's Jean-Yves Le Drian warning "there will be no military victory".

German Foreign Minister Heiko Maas said there should be pressure on all the actors in Libya "especially general Haftar".

A similar stance was taken by the UN Security Council which, following a closed-door emergency meeting Friday, said those responsible for re-igniting the conflict will be held responsible.

Map showing zones of control in Libya, as of April 5. By Thomas SAINT-CRICQ (AFP)

Libya has struggled to counter unrest since the 2011 overthrow of dictator Moamer Kadhafi, leaving dozens of militia to fill the void and ally with either the GNA or the rival administration in the east backed by Haftar.

At least one armed group from Misrata -- whose forces are mostly loyal to the UN-backed government -- arrived Saturday in eastern Tripoli to join the counter-offensive, according to an AFP photographer.

"We are waiting for orders to repel any advance by the enemy towards Tripoli," said the group's spokesman Khaled Abu Jazia.

Dozens of armed vehicles mounted with anti-aircraft guns were gathered in Tajura, in the suburbs east of the capital.

Tripoli residents have expressed concern that large-scale fighting could break out and began stocking up on food and petrol.

"We must store everything we need for the family, just in case, especially those with young children," said Farida, a mother pushing a full shopping cart.

Tripoli residents have expressed concern that large-scale fighting could break out. By Mahmud TURKIA (AFP)

"You never know how long it will last," she added.

Haftar's forces were driven back by a few kilometres on Friday evening after briefly seizing Tripoli's international airport, which was destroyed in 2014.

They were also pushed back from a key checkpoint west of the capital, less than 24 hours after seizing it during their lightning offensive towards Tripoli.

The latest escalation in the conflict-wracked country comes just days ahead of a UN-backed conference intended to unite Libya's rivals and pave the way for elections.

Russia's top diplomat on Saturday called for Libyans to "decide their future themselves" through "inclusive" dialogue.

"Without any sort of artificial dates that some are trying to force upon them from outside," Russian Foreign Minister Sergei Lavrov said during a visit to Cairo.

Despite the Tripoli flare-up, UN envoy Ghassan Salame insisted the April 14-16 talks in the Libyan city of Ghadames would go ahead.

"We are determined" to hold the talks "as scheduled" unless prevented by serious obstacles, Salame told a press conference.

"We want to reassure Libyans that we will stay alongside the Libyan people to make the political process a success without resorting to escalation."

Libya's unity government was created at UN-backed talks in 2015 but it has struggled to assert control, while a number of international initiatives since have failed to unite the country.