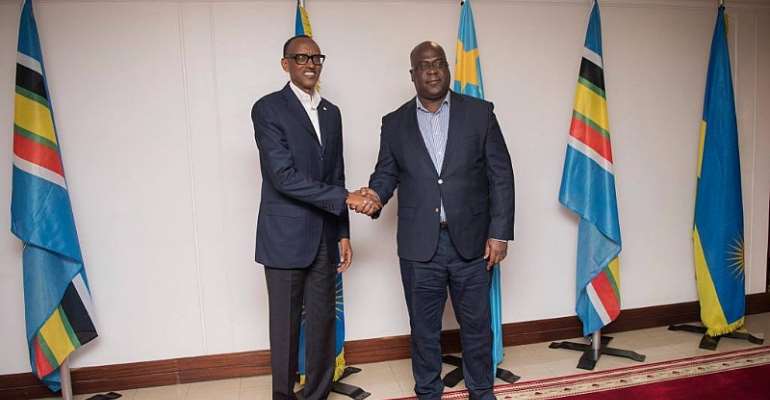 DRC President Felix Tshisekedi joined African political figures and business leaders in Rwanda on Monday for a business forum aimed at boosting private investments and regional integration. Host President Paul Kagame wants to establish a single regional market and for political divisions to be set aside. He may struggle to convince Kinshasa after years of strained relations.

"No one should be satisfied with business as usual," Rwandan President Paul Kagame said in his opening speech in front of some 1,500 stakeholders gathered for the Seventh Africa CEO Forum in Kigali on Monday.

The two-day forum, attended by national leaders and business executives from Togo, Ethiopia and the Democratic Republic of Congo, has brought to light the lack of progress made in improving regional integration and inter-African commerce.

"This is the time for the private and public sectors to come up with new ideas and make more progress,” Kagame insisted.

Despite more than 40 countries signing up to the African Continental Free Trade Area (AfCFTA) last year to enable the free movement of goods and services, "a lot remains to be done," said the Rwandan leader.

One of the main obstacles is politics. "If the politics is bad, everything else is bad," he added, speaking at a time where tensions between Rwanda and Uganda notably are strained. Earlier this month, Kigali closed its border with Kampala accusing it of arresting Rwandans, disrupting regional trade and of providing support and space for anti-Rwanda groups.

Rwanda's relations with neighbouring Democratic Republic of Congo have not fared better in the past either, but the presence of Congo's leader Felix Tshisekedi at the Africa CEO forum, on a personal invitation from Kagame, is a bellwether of better days to come.

Quest for recognition Tshisekedi's visit "is important as Paul Kagame has invited a certain number of CEOs to this forum, including other heads of state, so it is a sign of recognition," comments Emmanuel Dupuy, president of the Institute for European Perspective and Security Studies (IPSE).

"What is also important is that this visit coincides with that of his contender Martin Fayulu, who is visiting Europe to highlight the fact that the elections were not fair," adds Emmanuel Dupuy.

Independent observers have questioned the legitimacy of Tshisekedi's victory, after Fayulu accused the opposition leader of doing a back-room deal with outgoing President Joseph Kabila to block him from power. Both Kabila and Tshisekedi deny the allegations.

Tshisekedi is in "a fragile position because he does not have much leverage and he has raised a lot of expectations within the population," says Kris Berwouts, an independent analyst and author of Congo's Violent Peace.​

"​​The president needs the visibility and the reinforcement from outside partners and I think this is one of the important results he wants to achieve through this forum," he told RFI.

From foes to friends The choice of Paul Kagame as an ally has nonetheless surprised critics.

"We all remember the days where the Rwandan army was physically present on Congolese territory with a very huge negative impact on the population," adds Berwouts.

During Congo's Second War, Rwanda invaded its giant neighbour with the aim of crushing Hutu militants who fled over the border after killing more than half a million Tutsis in the 1994 genocide.

In 2010, the United Nations accused Kigali of plundering Congo's minerals, and even today, many Congolese still accuse Rwanda of arming and supporting rebel militia.

For IPSE's Dupuy, it is time to end "mutual accusations from both countries of using the other's wealth. There is a need to work closely together because the two are important players in the region."

In a symbolic gesture, Tshisekedi on Monday visited a genocide memorial and paid tribute to the 800,000 victims, a first by any Congolese leader.

Later in the day, his country was honored by the forum's organisers, who lit up the Kigali Convention Center, the venue of the Africa CEO Forum in the red, blue and yellow colours of Congo's national flag.

Land of opportunity Diplomacy may have been one of Tshisekedi's primary motivations for attending the forum, but so too was the hunt for investment.

"The attractiveness of DR Congo is still there," comments Laure Gnassou, an economist with extensive experience working on Congo.

The new president is notably keen to reassure investors unsettled by the country's volatile political situation.

The challenge now for Tshisekedi will be to attract investment beyond the mining sector towards other industries such as agro-business. He must also tackle corruption.

"Nothing has been done to address this," says Gnassou, warning that such lack of action could have a negative impact on the country's business climate.

DR Congo "remains a land of opportunity for investors because it is a resource-rich country."

For it to remain that way, it will depend on "how far Tshisekedi goes to address corruption to attract both foreign and national investors," says Laure Gnassou.