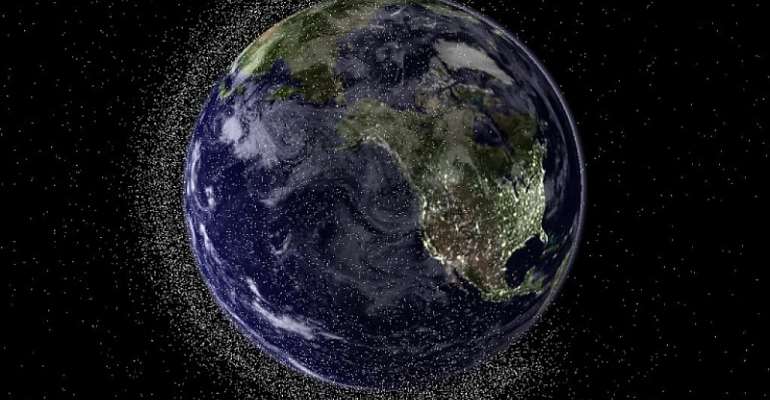 While international experts meeting in Geneva clash over how to prevent an arms race in outer space, Europe is hoping that efforts to replace an ageing Cold War treaty will find a way to rein in space pollution.

Twenty-five nations have sent experts to the closed-door talks – which will carry on until Wednesday next week – with the aim of finding a way through longstanding tensions between the US, China and Russia over the security of space.

The so-called Big Three appear to want to “weaponise” space on their own terms and, with huge strides in technology having been made since the Outer Space Treaty (OST) was signed in 1967, the final frontier is up for grabs.

As the US, China and Russia squabble over the development of sophisticated anti-satellite missiles and lasers, and the launching of weapons into space, the European Union says the very real threat of space debris is being ignored.

“Europe has been very keen to point out that none of the proposals put forward covers space debris – and that's one of the things that's most dangerous to satellites at the moment,” says Dr Sarah Lieberman, a senior lecturer at Canterbury Christchurch University, whose work focuses on European regulation and outer space policy.

“The US, China and Russia are creating more and more space debris as they argue over weapons being placed there. We think of space as being absolutely huge, but of course it's not. The usable bit of space where we can put our satellites is actually very small and it's getting very congested.”

Space junk can be anything from debris left over from space missions, to the thousands of defunct satellites that get stuck in endless orbit, forming a massive galactic traffic jam. (A US military program called the Space Surveillance Network monitors some 20,000 objects larger than a softball.)

China added to the debris in 2007 when it successfully destroyed an old weather satellite, shattering it into 3,000 pieces of shrapnel that threatened other satellites in its path.

“Anyone who's seen the film Gravity will have seen satellites and space stations being completely destroyed by very small pieces of debris,” says Lieberman. “Europe wants to see a treaty that addresses what we should do with space pollution, and how to get rid of satellites once they've reached the end of their useful time in space.”

Beijing on Wednesday denied US claims that China and Russia were raising the risk of conflict in space, and insisted that Washington is to blame for fuelling the space wars.

"While going ahead with its military build-up in outer space, the US is cooking up the so-called threat from China and Russia in outer space, trying to seek pretexts to pursue unilateral military advantage and develop advanced weapons," Chinese Foreign Ministry spokesperson Geng Shuang told a news conference.

While the aim of multilateral discussions such as the ones going on in Geneva is to prevent the militarisation of space, many argue this happened long ago. This is partly because these days it's unclear what a weapon really looks like – and it's this ambiguity that is at the heart of the decades-old stalemate between the US and its rivals to the east.

“From the Cold War and onwards we've seen the US, Russia and China exploring anti-satellite missiles,” says Alexandra Stickings, who works on space policy and security at Britain's Royal United Services Institute. “We've also seen a move towards non-kinetic threats to satellites. These are things like lasers that can be used to dazzle optical sensors; micro-frequencies that can be used to interfere with electronics and disable or disrupt satellites without necessarily destroying them.

“The problem is that it's very difficult to define what a weapon in space is – and this is why the current treaties don't cover any of this.”

1967 Outer Space Treaty out of date

“Since 2008 Russia and China have been seeking to define a WMD, whereas everyone else has moved on and is looking at what we're going to do about lasers and jammers.” Lieberman also points out that these days satellites can be completely disabled by a laser from the ground, while satellite signals can be disabled by a jammer the size of a mobile phone.

“The problem is the US wants a treaty that discusses what behaviour is acceptable in space … one that says you mustn't blow up or destroy people's satellites, and that you mustn't interfere with satellite broadcasts,” says Lieberman. “China and Russia are much more focused on not having weapons in space – and they would like to have it clearly stated in a treaty what constitutes a weapon and what doesn't.”

With technology often performing dual civilian and military roles, just about everything in space can be considered a potential weapon. “One example is developments with manoeuvring satellites that can approach other satellites,” explains Stickings. “This technology can be used for debris removal or on-orbit servicing, but it can also be used for adversarial purposes.”

Agreeing a new treaty is a difficult task

Finding a language that all sides can agree on is going to be tough. Given that satellites are essential for civilian use – TV signals, in-flight phone communications, GPS navigation, climate monitoring – how much do we have to lose if negotiations collapse?

“Continued lack of progress will generally erode the foundations of the non-proliferation regime and might result in the Outer Space Treaty becoming increasingly irrelevant as technology advances,” Tigkos says. “This would allow non-WMDs to become a viable and affordable alternative space weapon in the future.”