Africa and the Nobel Prizes in the Sciences 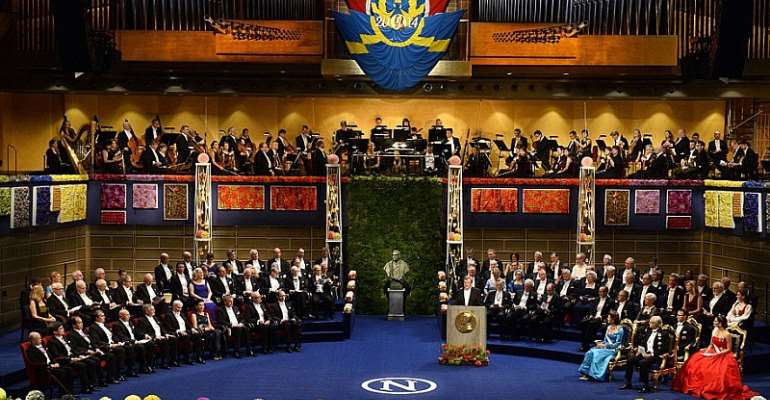 December 10th is the day Swedish scientist and inventor, Alfred Nobel, died. On this day, in the ornate halls of Konserthuset, situated right in Stockholm’s city centre, a group of achievers will receive the most prestigious academic prizes in the world from the hands of Carl XVI Gustav, the king of Sweden. It is a very elaborate ceremony with the entire royal family in full ceremonial dress in attendance. Every participant will be immaculately turned out in formal attire. There will be classical music from an orchestra with some well-known conductor holding the baton. There will be popular music too. The world’s press will be in attendance and the event will be telecast live in many countries around the world.

The exceptionally brilliant achievers who will be honoured this day will sit in a semi-circle on centre stage. From there they will stand up prize by prize, as their names are mentioned and the citation summarising the achievement for which they are being honoured is read, and walk to receive the prize from his majesty’s hands. It is a moment of extreme pride for the recipients.

This year, as in so many others of this 117-year old ceremony, there will be no Africans in the line-up. No, Africans do not do well at these awards. Only a few Africans have won a Nobel Prize in the sciences. No black African has ever won a Science prize.

The Nobel website lists 590 Nobel Prizes awarded to 935 individuals and organisations between 1901 and 2018. 22 Africans have so far won the prize in five of its six categories. South Africa tops the African league with 10 winners of 9 awards (3 Peace awards, 3 in Medicine, 2 in Literature and 1 in Chemistry); Egypt has 4 awards (two Peace prizes and one each in Chemistry and Literature); Algeria has 2 (in Literature, counting Albert Camus, and Physics); Liberia has 2 Peace Prizes; Nigeria one in Literature; Congo, our own Kofi Annan for Ghana, and Kenya (one Peace prize each). The African Science prize haul has been meagre: 6 in all (3 in Medicine, 2 in Chemistry and 1 in Physics). Of the 6, South Africa has 4 with Egypt and Algeria taking one each. No African has ever won the Sveriges Riksbank Prize in Economic Sciences in Memory of Alfred Nobel instituted by the Swedish Central Bank (the oldest central bank in the world dating to 1668) and first awarded in 1969.

The Peace Prize is awarded by the Norwegian Nobel Committee and presented in a ceremony to the winners in Oslo a day before the Stockholm event. It has been relatively easier for Africans to win the Peace Prize which, in a way, is a reflection of the continent’s parlous state where a few individual do-gooders can distinguish themselves amidst all the chaos. But it is the sciences that account for much of the material progress of the human race.

The most probable reason why Africans do not win the Science prizes may be because the continent has few high class universities and institutions doing original research. This is seen in the various rankings of universities that are common these days in which African universities rank very low, if they are captured at all. Another way of looking at it is the paucity of papers by Africans published in the world’s quality academic scientific journals. Research in the natural sciences is a highly specialised field. It costs a lot of money. The state is poor in Africa and there are no rich foundations either.

An African who wins a science prize will most likely be working at a research institute in the West. Claude Cohen-Tannoudji, who shared in the 1997 Physics Prize, is listed as a French-Algerian and did his work at the University of Paris. Ahmed Hassan Zewail, the Egyptian who was joint winner of the 1999 Award in Chemistry, is a naturalised American who did his PhD at the University of Pennsylvania and works in California Institute of Technology and the University of California, Berkeley. Well, he did his first two degrees in his native Egypt. Even all the South African Science Prize winners were affiliated to universities in the West at the time they won their prizes. Africa is simply not an intellectual power house.

Sometimes, it is argued that the rest of the world fails to recognise the contributions of blacks, especially in Africa, to world progress. There may be some racial prejudice working against blacks. This may be difficult to prove. In a racist world, blacks may find it difficult to get the top professorial posts in the prestigious universities that put them in charge of huge scientific research projects. There are only few black role models in the sciences for black youth. The teaching of science in Africa is poor and attracts too few students. The Jews, on the other hand, have been over-represented in the Nobel winners’ lists. Jews constitute about 1% of the world’s population but have won 20% of all Nobel Prizes. Most of these were in the Sciences.

The winners’ list has been dominated by WASP American males. There is certainly a bias in favour of Western education and knowledge production. Minorities of all categories have fared badly. Only a few women have won the Science prize. The two female science prize winners this year is a rarity. But Marie Curie has the singular distinction of wining two different science prizes – Physics (1903) and Chemistry (1911). Her daughter, Irène, shared in the Chemistry Prize in 1935. Big non-Western civilizations like China, India and Japan have fared relatively poorly. The Chinese are determined to bridge this gap. According to The Economist, Tsingua University in Beijing, modelled on Western research universities, is now producing more papers in the top 1% of the most highly cited papers in maths and computing and is said to be on track to, in five years, catch up with Massachusetts Institute of Technology, the leaders in the top 1% of STEM papers.

The Royal Swedish Academy of Sciences is responsible for the selection of the winners of the Chemistry, Physics and Economics prizes from among candidates selected by the various committees for each prize. It is a process that takes over a year. Some 3000 qualified persons (professors of universities around the world, Nobel Laureates, members of the Royal Academy) are sent confidential forms to make their nominees. A third of the members of the Academy of Sciences are foreigners each an expert in her field. The winners of the prize in Physiology or Medicine are selected by the Nobel Committee for Physiology at Karolinska Institutet (the country’s leading medical research institute) from the names submitted by invited nominators. The processes are supposed to be thorough and to encompass the entire world. Since Africa does not boast many world class universities, not many professors working on the continent are likely to be nominators.

The names of a few black African scientists (including a recently deceased Ghanaian) have been bandied about as people who should have received a Nobel Prize or who were hot on the nominations’ lists. Since the deliberations of the selection committees are kept under seal for 50 years, it is difficult to say which black African scientists came near to winning a Prize.

How much is the award really worth? The winners receive a diploma, a medal and a cash prize. The medal is 18 karats green gold plated with 24 karats pure gold weighing around 175 grams. This costs about 10,000 dollars today but is, of course, worth much more than its weight in gold as a collector’s item. In 2015, Nobel laureate Leon Max Lederman's Nobel Prize sold at auction for $765,000. Lederman's family used the money to pay for medical bills associated with the scientist's battle with dementia. The cash award is 9 million Swedish crowns (about one million US dollars) and is awarded for each prize with joint winners splitting the amount. The prestige that comes with the award is priceless. But the cash prize is well worth it. Professors are not often the best paid workers. Wolé Soyinka (the only black African to win a Nobel Prize that is not the Peace Prize) said he invested his cash prize in his research centre in his Abeokuta hometown. The prize is a boost for the institutions to which the winners belong – something that can be used to attract more research funding and the brightest students.

This year, there will be no prize in Literature. The Swedish Academy which chooses winners of the Literature prize has been wracked by infighting on matters that are not directly related to the selection process. There have been resignations from this august body whose 18 members are chosen for life. It is the worst crisis in the Academy’s 232-year history. The Academy promises to choose two winners next year – if they are able to resolve their differences. The Literature prize is the one most people can relate to. Everybody can read a story book.

Nobel Prizes are not the only ones in the world. These days, there are many others in various fields overlooked by Alfred Nobel. Some of these pay higher sums than the Nobel. But the Nobel still remains one of the oldest and, arguably, the most prestigious. It is the jewel in the crown of multiple award winners. It is the one that everybody wants to win. And in this struggle, Africans are left far behind.

The Awards Day will end in the evening with a huge banquet at the magnificent Stockholm City Hall (Stadshuset) overlooking the waters of Lake Malaren. All the award winners and the cream of Swedish society will be there. Everybody will be elegantly dressed and the press will pick over the menu, the sitting arrangements and the dresses the following day. Even as the evening ends in dancing, the various committees that select each year’s winners would have already started looking for the next winners. Shall we see an African in the line-up next year?