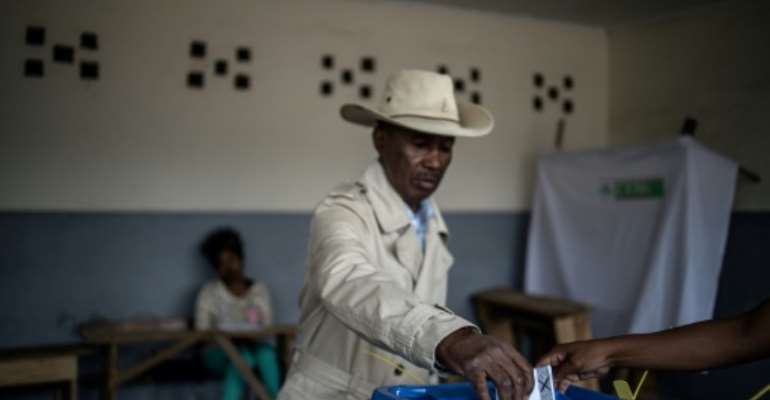 Nearly 10 million voters are eligible to cast ballots for one of 36 candidates. By Marco LONGARI (AFP)

Election officials began counting votes in Madagascar after Wednesday's election for a new president in which three former heads of state were running as the Indian Ocean island sought to defuse a political crisis.

The demonstrators forced Rajaonarimampianina to accept a "consensus" government tasked with organising an election in this impoverished nation with a history of coups and unrest.

Nearly 10 million voters were eligible to cast ballots for one of 36 candidates who also included two ex-prime ministers, several pastors and a rock star.

To win, a candidate must get 50 percent of the votes cast or a second round will be held on December 19.

Provisional results are expected by November 20 which must then be confirmed by the High Constitutional Court by November 28. 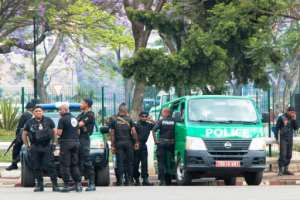 Security forces were on alert across the capital which has seen months of sometimes violent protests ahead of the vote. By Mamyrael (AFP)

"I want a president who gets me out of poverty," said Eline Faraniaina, a retired 60-year-old as she cast her ballot at a vocational college.

In one polling station, three women painstakingly showed each completed poster-sized ballot paper to observers and party activists as they began the arduous task of manually tallying the votes.

Electoral officials were equipped with torches to be able to continue counting votes into the night in the event of power cuts which are common on the island.

Helicopters will be used to collect results from remote polling stations that are hard to reach on the country's dilapidated road network.

Rajaonarimampianina is competing against two of his predecessors.

Marc Ravalomanana, a milk mogul, ruled from 2002 to 2009 and Andry Rajoelina, a former club night promoter nicknamed "the DJ", succeeded him and was in power until 2013.

The trio staged massive rallies over the weekend in the capital, each attracting tens of thousands of supporters. 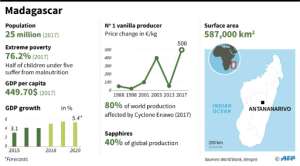 The former French colony has struggled to overcome political divisions after a disputed 2001 election that sparked clashes and a 2009 military-backed coup that ousted Ravalomanana.

Apart from protests earlier this year, Rajaonarimampianina's term was mostly peaceful but anger over the past still simmers.

If re-elected, he has promised "a new phase" in Madagascar's development.

"Frankly it's difficult to live like that. There are days when I can't feed my children," said Tantely Randriandrina, a washerwoman who earns less than $1 a day. 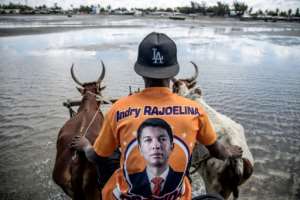 A man wears a t-shirt of Andry Rajoelina, who was running again for president after serving as head of state between 2009 and 2013. By MARCO LONGARI (AFP/File)

The key battle will be between Rajaonarimampianina and the former presidents Ravalomanana and Rajoelina, according to analysts and the findings of a banned pre-vote poll seen by AFP.

"The big risk of this election is that it will return us to an era of crisis," said Sahondra Rabenarivo, an analyst at the Malagasy Observatory on Public Life.

"It's very important that the results are credible and that the third-placed candidate accepts them."

Rajaonarimampianina called it "a big day... a victory for democracy" after casting his ballot.

Ravalomanana has a tense relationship with Rajoelina, who succeeded him with the backing of the army in the 2009 uprising.

Madagascar is one of the world's poorest countries, according to World Bank data, with almost four in five people living in grinding poverty. 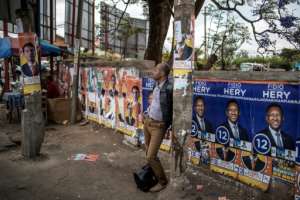 The former French colony has struggled to overcome political divisions after a disputed 2001 election that sparked clashes and a 2009 military-backed coup that ousted Ravalomanana. By MARCO LONGARI (AFP/File)

The main contenders -- armed with significant campaign resources -- have crisscrossed the island of 25 million by helicopter promising voters a better future.

"They should revive the country. Madagascar suffers malnutrition and is ravaged by cyclones," said retiree Lili Rahaingo, 68, as she queued to vote in the capital.

Although two people died in bloody protests in April, campaigning has been peaceful and the vote passed off without incident, the interior ministry said.

Some candidates have been accused of vote-buying, with the local head of Transparency International Ketakandriana Rafitoson saying she was "disgusted" by the offer of T-shirts, sewing machines and even floor tiles to secure votes.

Around 20 lower-profile candidates have alleged irregularities in the electoral roll and had unsuccessfully called for the poll to be delayed.

Both Ravalomanana and Rajoelina were banned from contesting the last elections in 2013.