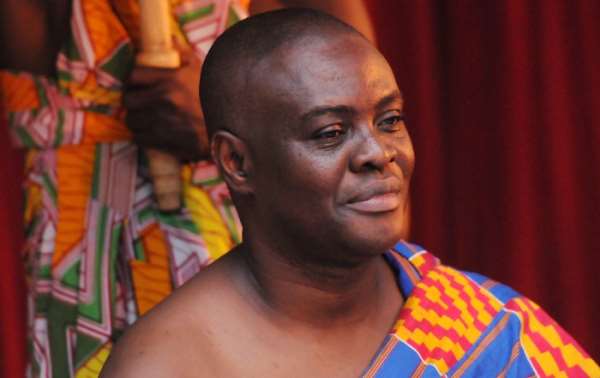 The Omanhene of Dormaa, Osagyefo Oseadeeyo Agyeman Badu II, has admonished Ghanaians to put a stop to the practice where major issues of national concern are often politicized to the detriment of the masses.

Rather, he said, people should separate politics from pertinent national issues and approach them with the seriousness and the attention they deserve.

He stated that a major intervention in the country’s education sector like the Free SHS policy must not be politicized but rather attract the maximum support of all well-meaning Ghanaians due to its huge impact on the youth in the long term.

Osagyefo Oseadeeyo Agyeman Badu II was speaking at a durbar to climax activities marking the 40th anniversary of the St. James Seminary/SHS at Abesim near Sunyani.

The occasion was under the theme, “Discipline and academic excellence in Senior High Schools – the role of religious bodies in Ghana.”

The Dormaahene called on all Ghanaians to support the government realize its objective of providing opportunities for all qualified Ghanaian children to enjoy secondary education through the Free SHS policy.

Rev. Father Alex Ansu Ebo said the school has made considerable gains over the years, especially since 2011 in the area of academic performance.

“The school has been adjudged nationally as the best academic performing school in West Africa Secondary School Certificate Examination (WASSCE) since 2011.”

“All 210 candidates presented in 2008, were shortlisted for university. In 2009, the school was acclaimed the nation’s best performing Senior High School in WASSCE.”

He said the school hopes to win the National Science and Maths Quiz in the next three years.

The Catholic Bishop of Sunyani, Most Rev Matthew Kwasi Gyamfi stated that the Free SHS policy should not be allowed to be a project of the Central Government alone, adding that it is one of the most effective intervention in the country’s education sector.

He said government must encourage individuals, corporate organizations, philanthropists and other well-meaning individuals to generously and freely contribute both in cash and in kind toward the Free SHS policy to make it successful.

“There is no limit to the resources needed for effective and quality education…The State would need the concerted efforts and contributions of all stakeholders to make it a success”, Bishop Gyamfi explained.

St James Seminary and Senior High School was established in 1978 by the late Bishop of the Sunyani Diocese of the Catholic Church, Most Rev James Kwadwo Owusu. Until 1994, the school admitted only Catholics who aspired to become Catholic priests.

Following calls by Catholics in the Sunyani Diocese for a Boys’ school to cater for the male children, the Seminary was opened to non-seminarians to alongside the would-be priests to enable them benefit from the high academic and moral discipline in the seminary.

The 40 Anniversary celebrations attracted a large number of people from all walks of life including the MP for Sunyani East, Kwasi Ameyaw-Cheremeh, who represented President Akufo-Addo at the programme, the Chairman of the GES Council, Michael Kenneth Nsowah and several other dignitaries.

Master Pius Kyere, a product of the school who is now a medical student at KNUST received a Special Award for being the Over-all Best student in West Africa during in the WASSCE.

Akatsi South: Pastor and wife allegedly killed by unknown as...
56 minutes ago