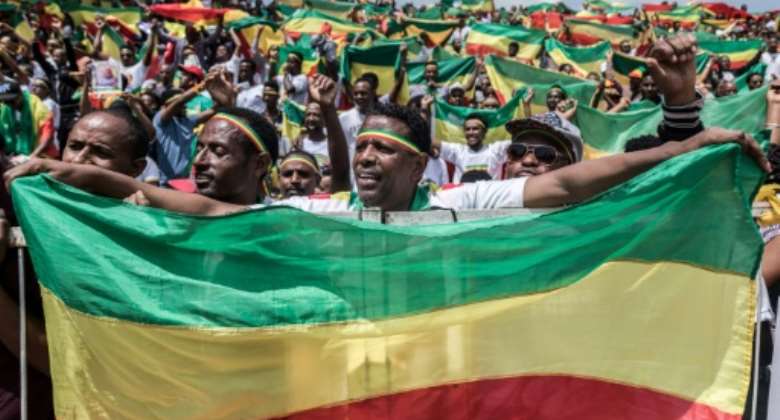 Ethiopian President Abiy's return of banned groups, talks with dissidents and peace with neighbouring Eritrea have been praised at home and abroad. By YONAS TADESSE (AFP)

Two decades ago, Ethiopia's leaders took a gamble: give the country's many ethnicities their own autonomous regions in the hope greater prosperity would forge national unity.

For a time it worked, but now simmering inter-communal disputes have erupted into bloodshed, with violence displacing 1.4 million people this year, the most globally, according to the Geneva-based Internal Displacement Monitoring Centre.

The rise in violence contrasts sharply with the global praise for Ethiopia's young, reformist Prime Minister Abiy Ahmed, who has forged peace with neighbouring Eritrea, vowed to overhaul state companies and reached out to dissidents at home.

Analysts see no single cause for the killing that has stretched from the countryside to the capital and left scores of Ethiopians dead.

But they say Abiy, who inherited a vast, ethnically diverse nation used to the iron-fisted rule of his predecessors, has his work cut out for him as he seeks to impose his leadership without tipping into authoritarianism.

"My belief is that is there will be no re-establishment of law and order without strong leadership," said long-time independent Ethiopia researcher Rene Lefort.

He said the centralised decision-making behind the reforms has led to paralysis in the regions, creating fertile ground for discontent, violence and score-settling.

Under Abiy, he said, "there is a deep power vacuum."

The 1995 constitution, written by the Ethiopian People's Revolutionary Democratic Front (EPRDF) after it unseated the Derg military junta in 1991, puts ethnicity front and centre.

People from ethnic community of Oromo were among those protesting for more rights before Abiy was appointed premier. By YONAS TADESSE (AFP)

The constitution is one of few in the world to allow not only self-governance, but the option of secession.

The intention was to address demands for local empowerment that the Derg tried to stifle, said Zemelak Ayele, director of the Centre for Federalism and Governance Studies at Addis Ababa University.

"It was necessary to create an institutional mechanism so that peoples' culture was respected," he said.

That has not happened and ethnicity remains pronounced despite the country's surging GDP.

That is due to the tendency of the EPRDF, which many saw as dominated by the Tigrayan ethnic minority before Abiy's rise, to overrule the will of the regions and their peoples, Zemelak said.

The Eritrean President's July visit to Addis Ababa marked a peace agreement and an end to long-running hostilities between the African neighbours. By STRINGER (AFP)

Both groups charged they had been marginalised by the EPRDF, and their uprisings led to hundreds of deaths, tens of thousands of arrests and the shock February resignation of Prime Minister Hailemariam Desalegn.

While the anti-government unrest dissipated after Abiy took power, ethnic fighting flared almost immediately, and has continued despite Abiy announcing popular reforms, including a reshuffle of security chiefs, while warning security forces against rights abuses.

Nearly one million people have fled their homes in the coffee-growing south amid clashes between the Gedeo ethnic minority and the Oromos, while fighting in September between the Oromos and other ethnic groups in and around the capital Addis Ababa killed up to 65 people.

Map of the border between Ethiopia and Eritrea. By Dario INGIUSTO (AFP)

Many of the rivalries that fuelled the violence have simmered for decades, and analysts differ as to why they flared now.

Awol Allo, an Ethiopian commentator who teaches law in Britain called the clashes "the boiling-over of frustrations" resulting from the EPRDF's absolute rule.

But Harry Verhoeven of Georgetown University Qatar said the perception that demonstrations undermined Hailemariam sent a message that "violence pays".

"One can't underestimate the power of example here," he said.

The EPRDF has grown increasingly divided since the 2012 death of Meles Zenawi, a powerful prime minister known for forging consensus among the four parties that make up the governing coalition.

Ethnic violence in different parts of the country has sparked angry in the Ethiopian capital. By Maheder HAILESELASSIE TADESE (AFP)

"Governments usually become authoritarian when they're forced into situations. They make mistakes and then to cover-up for that mistake, they double down," he said, pointing to Meles, who was a strongman ruler, and his predecessor Mengistu Haile Mariam, the Derg's bloody dictator.

"I hope, this time, both the opposition and the government will choose different paths," Awol said.