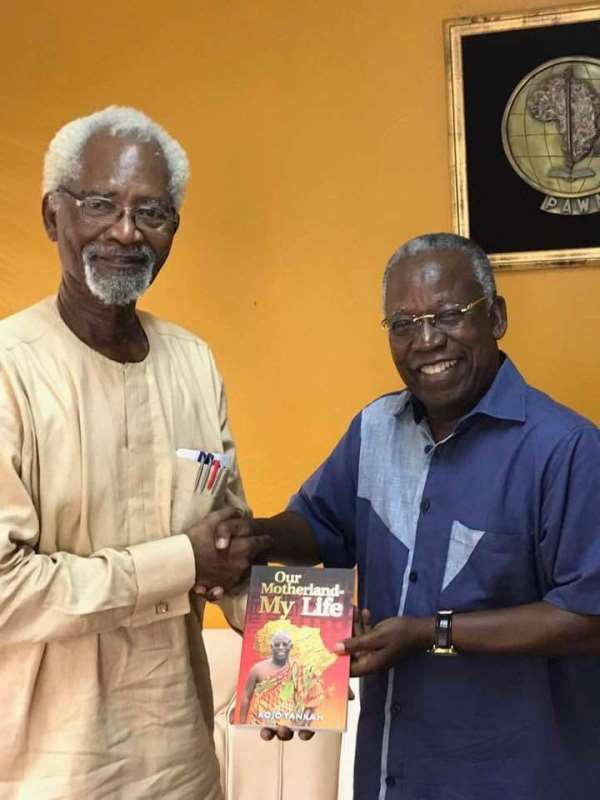 “Odododiodiodio…” “A country in which we live in it/ You take your foodstuffs to the market/ Only to ask the buyer to call the price…” “O America, you are a prostitute/ Everybody dreams of kissing you…” Rosimaya, my love…

These were some of the lines from the poetry of Prof. Atukwei (John) Okai (1941-2018) that kept tumbling off the top of my head. Today is one of those days that are tabooed on the American mainstream cultural calendar. I am, of course, referring to the much-maligned Friday-The-Thirteenth. The last thing that I expected to be writing today, of all days, was this “involuntary” tribute to the memory of unarguably Ghana’s greatest neo-oral (performance) poet of the second-half of the 20th Century. I write this tribute that almost did not get written, in celebration of the illustrious life of the former President of the Ghana Association of Writers’ (GAW), from the very cockles of my heart and soul. I would not be the least bit surprised if Atukwei Okai also turns out to have been the de facto founder of the Ghana Writers’ Association as we have come to know it. At his death, Atukwei was also the Secretary-General of the Pan-African Writers’ Association (PAWA), a hard-driving “Literary Dictator” in the image of President Kwame Nkrumah, his ideological icon and godfather, albeit in a far more benign and auspicious incarnation.

As far as I have been able to ascertain, at least for my generation of Ghanaians born in the post-independence era of the late 1950s and the 1960s, like the metaphorical association of the Nile with Ancient Egyptian Civilization, Prof. Atukwei Okai was esthetically fungible with the rhapsodic dramaturgical sensibilities of modern Ghanaian poetry in all its eclectic purity and trans-ethnic and trans-cultural organicity. In other words, for me, the passing of Nii Atukwei Okai at the “youthful” age of 77 is a very personal touching loss. First of all, exactly 20 years ago, I dedicated one-full chapter of my doctoral dissertation titled “Atumpan: An Afrocentric Analysis of Ghanaian Anglophone Poetry” (1998 – Temple University, Philadelphia, Pennsylvania) to his work. I have also partially dedicated one of my volumes of poetry titled “Dorkordicky Ponkorhythms” to this indomitable crusading cultural revolutionary.

In order to fully appreciate the formidable stature of the man, one needs to familiarize oneself with the following Akan/Twi proverb: “Every noble personality is not without his/her own fair share of enemies.” A more linguistically accurate translation may be rendered as follows: “Every noble person is a great source of envy-bred irritation.” I am also quite certain that were Uncle Atukwei physically present with me here, he would have been tempted to more poignantly and rhythmically edit the two variations of this famous Akan proverb translated here, even as he once affably attempted to do at Queens College of the City University of New York (QC of CUNY) while my late father was instructing his acting class in the late 1970s. Uncle Atukwei was then visiting with the late Prof. Ofuatey Cudjoe, who was then Chairman of Queens College’s Department of Africana Studies.

Well, as I was saying, this rather brief tribute almost did not get written because the publication of the news of Uncle Atukwei’s passing came in tandem with the sort of awe-tinged shock that has a gilt of trauma laid at its knife-sharp edge. I am also inclined to suspect, now that we are at it, that the “Odododiodiodio” Constituency in Accra-Central may very well have been plagiarized from one of his poems that forms a part of his collection titled “Lorgorligi Logarithms.” Of course, I was punning or riffing on this seminal classic when I titled my own aforementioned poetry collection “Dorkordicky Ponkorhythms.” Unfortunately, for reasons that I do not feel comfortable to delve into, right now, I do not know whether Uncle Atukwei ever laid his hands on a copy of my collection which is also subtitled “Wheel of Fortune.”

You see, when someone is so generously gifted, as South Africa’s Nadine Gordimer once had occasion to remark in a New York Times’ book review about Nigeria’s Prof. Chinua Achebe, my old and favorite teacher at City College of the City University of New York (CCNY of CUNY), you wish that literary genius could live in perpetuity. Fortunately, by the magical stroke of both the book and digital technology, Uncle Atukwei is likely to live comfortably through the ages. He was a genius and a masterful literary artist because the former Young John Okai, as his generation of African-American writers knew him, including the poet Sonia Sanchez, another one of my Temple University professors, was not afraid to experiment with language, both that of his Ga native tongue and the English language. He also read and wrote poetry and prose in the Russian language, in which he had obtained the Master’s Degree from Moscow’s Gorky Literary Institute, and which he was also to teach at both the University of Ghana and the University College of Education, Winneba, whose languages department he also headed.

Like the great 17th Century British Metaphysical Poet, John Donne, “Uncle Atukwei’s death has significantly diminished me, because his poetry has had a seminal influence on me” as a poet, critic and literary artist.

More Feature Article
Modern Ghana Links
Biden administration signals hope for a new START
The Police Must Desist From Selective Enforcement of Imposition of Restrictions Law
Ex-President Trump And Four Years Of Witchcraft In American Politics
Rawlings Regretted the Rotten Fruits of His Populist Revolution
Could a Supreme Court Judge be involved in Corruption?
“Prophet” Badu Kobi must Keep his Confusion-causing Chattering Beak Shut
Awon-Ate Foundation launched in Fumbisi
Remake The NPP Now!!!
Will there be consequences for many - Were the next Jerry Rawlings to strike?
Election Reports Quotes Dossiers
TOP STORIES