NDC Polls: Vote for a 'Trusted Team' to save Ghanaians from hardships - Secretary hopeful 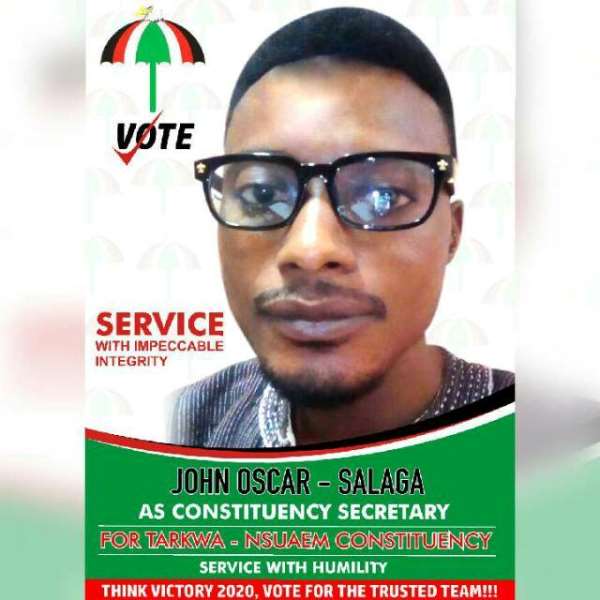 The Constituency Secretary hopeful of opposition National Democratic Congress (NDC) in the Tarkwa-Nsuaem of the Western Region, John Oscar-Salaga has urged NDC delegates in the area to vote for a 'Trusted Team' to wrestle power from the NPP and save Ghanaians from economic hardships.

The NDC is preparing to go to poll on Saturday, June 23, 2018 to elect Constituency Executives across the country to steer the affairs of the party for the next four years.

In a statement issued on Wednesday, June 20, 2018, signed by the group's Leader and copied to GhanaWeb's Western Regional Correspondent indicated that "Distinguished comrades, the TRUSTED TEAM has once again risen to save our beloved NDC from the abyss, but that cannot be possible without your votes".

"Distinguished ladies and gentlemen, I can state unequivocally without fear of contraction that, the Trusted Team is embedded with all these qualities and virtues, thus, making us the favorite team to be able to wrestle Ghanaians from the plagues the NPP administration has plunge this country into", he explained.

He admitted that the Tarkwa-Nsuaem has been the stronghold of the ruling NPP but promised to wrestle the seat from the NPP in 2020 if voted for the 'Trusted Team' coming Saturday.

He added that the 'Trusted Team' has worked hard to reduce the voting pattern from 2012 to 2016 and need to be voted for coming Saturday.

He, therefore urged the delegates to make a good choice devoid of sentiment and emotions and added that whether the NDC will progress or retrogres depends on the choice the delegates will make on Saturday.

He also said the NPP government led by President Akufo-Addo has brought so many economic hardships on Ghanaians and he mentioned workers like; small scale miners, farmers, market women, contractors, drivers among others.

Below is the full statement
SAVING TARKWA-NSUAEM NDC FROM THE ABYSS, THE ROLE OF DELEGATES!!!

Dear delegates, the roadmap to victory 2020 began with the implementation of series of programmes rolled out by NEC shortly after the 2016 defeat.

Notably, the regional unity walks, the reregistration of party members, election of polling station executives, among others.

We have come to a crucial stage in our quest to recapture political power come 2020. As to whether Tarkwa-Nsuaem NDC will progress, retrogress or standstill is dependent on the choices delegates will make on 23rd June.

To this end, it is very imperative on you delegates to make choices devoid of sentiments and emotions.

NDC is the only hope for the dejected Ghanaians who have lost confidence in the corrupt and incompetent NPP administration.

It is against this backdrop that we ought to elect constituency executives bearing in mind that they are coming to work hard to win the election 2020 to alleviate Ghanaians from this suffocation and nothing else!

As a political party, our primary objective is to win political power through elections and manage the resources of the state judiciously in the best interest of the citizenry.

But before you finally go to the polls to exercise your franchise, I would like to entreat you NOT to consider yourselves just delegates, but destiny changers as far as Tarkwa-Nsuaem NDC is concerned!

You've got the fate of Tarkwa-Nsuaem NDC in your hands, and how the party is going to perform in the 2020 general elections largely depends on your decisions on 23rd June.

Tarkwa-Nsuaem NDC is now at a crossroad, do not hurriedly take decisions based on sentiments and emotions.

I would like to once again, entreat delegates to pause for a moment and ponder over which route to take before taking any further step.

Like I said earlier on, we have come to an intersection; where there's only one route called the TRUSTED TEAM that leads to the promised land.

A land where our aspirations of winning both the Presidential and Parliamentary elections come 2020 can be realized.

And that is the route I'm recommending for all delegates.

In 2004, the parliamentary vote difference between the NPP and the NDC was embarrassing 17,648 (NPP, 32,154 - NDC, 14,506). And that was when a group of young, hardworking and courageous men and women of integrity resolved to save the party from the abyss by contesting for various positions in the 2006 constituency conference held to among other things, elect constituency executives.

Notable among them and their positions are; Mr. Isaac Appiah, aka Uncle Kaya, the current Vice chair of the Trusted Team as Vice Chairman, Mr. Stephen Ayombisa as Secretary, Mr. Stephen Numfah as Organiser.

You would realize that, consistently, we were closing up with the NPP, thus, hoping to eventually overtake them in 2016 to win the parliamentary seat for the first time in a competitive manner.

Unfortunately, these hard working men and women of substance, including myself, Hon. Danladi Salifu, Stephen Ayombisa, Stephen Nunfah, Anita Fiagbenu et al who have been consistently closing up with the NPP were voted out of office at a constituency conference held on 28th August, 2014 at Tarkwa Secondary School (Tarsco).

The consequences of replacing able well-fed horses with malnourished knee-jerking horses in a race at the 2014 conference is the humiliating defeat the party suffered in the hands of the NPP in the 2016 general elections.

(NPP= 42,594 - NDC= 24,044)
A very debasing result, right?
Distinguished delegates, as I have clearly illustrated with the figures above, we're going into the 2020 general elections with a vote deficit of 18,548. To be able to catch up with the NPP and eventually overtake them to win the parliamentary seat in the 2020 elections, hard work, commitment, dedication, loyalty, pragmatism, strategy, time, resilience and above all, integrity will be required.

Distinguished ladies and gentlemen, I can state unequivocally without fear of contraction that, the Trusted Team is embedded with all these qualities and virtues, thus, making us the favorite team to be able to wrestle Ghanaians from the plagues the NPP administration has plunge this country into.

Distinguished comrades, the TRUSTED TEAM has once again risen to save our beloved NDC from the abyss, but that cannot be possible without your votes.

We are a team of substance, a team with men of women of courage, a team that is not in the pocket of our political opponents and above all, a team with the ability to wrestle power back from the NPP. We shall serve you diligently with utmost humility!

Endorse the TRUSTED TEAM en bloc for a guaranteed victory 2020 both in the Presidential and Parliamentary elections.