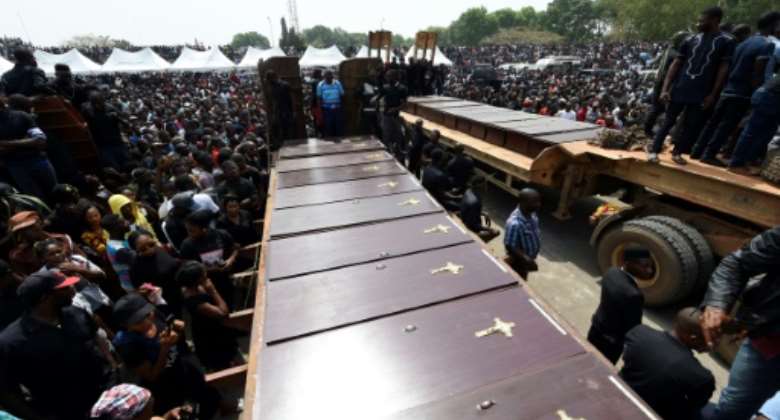 Coffins arrive at Ibrahim Babanginda Square in the Benue State capital Makurdi, on January 11, 2018, during a funeral service for scores who died following clashes between Fulani herdsmen and natives of Guma and Logo districts. By PIUS UTOMI EKPEI (AFP/File)

Nigerian cattle breeders on Sunday defended themselves from criticism after recent clashes with farmers left 80 dead, claiming they had lost more than 1,000 people to violence since mid-2017.

Fulani herdsmen have been blamed for a spate of attacks against farming communities in the central state of Benue since the start of this year, putting pressure on the government to act.

President Muhammadu Buhari has been criticised for his response to the attacks, which security analysts assess could pose a bigger threat than Boko Haram in the country's northeast.

Pressure for land and water is seen as the main driver of the conflict, alongside ethnic and sectarian grievances, while a failure to prosecute those responsible has led to a spiral of tit-for-tat attacks.

The national secretary of the Miyetti Allah Cattle Breeders Association of Nigeria, Baba Usman Ngeljarma, said it was wrong to see the herders as solely responsible.

Ngeljarma claimed that a series of attacks in the Mambilla area of Taraba state last June left more than 700 dead.

Local politicians and police gave a much lower death toll at the time. Conflicting numbers are not uncommon in Nigeria and it was not possible to immediately verify the figures.

But the high numbers are in line with reports that there has been an annual average death toll in the conflict of more than 2,000 between 2011 and 2016.

The International Crisis Group said in a report published last September that more than 2,500 people were killed in 2016.

Ngeljarma said no-one had been arrested for any of the killings, "even when the perpetrators are well known to the victims", highlighting a problem recognised as contributing to tit-for-tat attacks.

He said the situation was fuelled by "draconian laws" enacted by some state governments to ban open grazing of cattle on farmland.

Such legislation has been blamed for the attacks in Benue.

Identity politics is strong in Nigeria, particularly along ethnic and religious lines. The herders are mostly Muslim while the farmers are largely Christian.

Buhari, himself a Hausa-speaking Muslim Fulani, has warned against what he described as "simplistic reductionism".