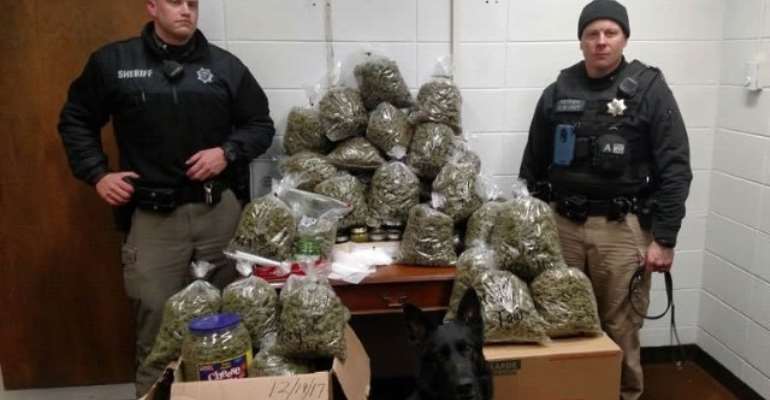 Plans for a “weed Christmas” went awry on Tuesday after authorities in Nebraska found an elderly couple with 60 pounds of marijuana in their truck as they drove across country, NPR reported.

Patrick Jiron, 80, and his wife Barbara, 83, were driving from California to Boston, Mass. and Vermont when they were pulled over Tuesday by sheriff deputies in York County, the outlet said, citing the York News-Times.

Authorities reportedly saw the Toyota Tacoma drift over the center line of the road and not signal. When they pulled the vehicle over, deputies smelled a pungent odor of marijuana, NPR said.

When asked, Patrick reportedly admitted that drugs were in the truck and allowed deputies to perform a search.

“They said the marijuana was for Christmas presents,” Lt. Paul Vrbka of the York County Sheriff’s Department told the York News-Times.

Beneath the pickup topper in the back of the truck, deputies discovered 60 pounds of marijuana and several containers of concentrated THC, NPR reported. Authorities reportedly estimated the weed to be worth more than $300,000.

The pair were charged with possession of marijuana with the intent to deliver and no drug tax stamp, which is required by Nebraska state law, NPR said. Patrick Jiron was placed in York County Jail, but his wife Barbara was not due to a medical issue, USA Today reported.