But Asiedu-Nketia, You Are A Certified Bui Dam Thief! 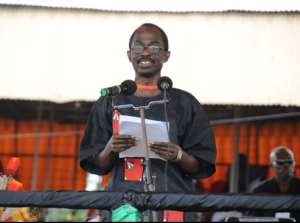 Common sense dictates that cultural expectations and acceptable and unacceptable modes of human values change with time, sometimes even radically so. Which is why the decision by Britain’s Prince Harry to conjugally engage and settle down permanently with Ms. Meghan Markle, the mixed race, and partly slave-descended American actress, is being globally celebrated as marking a salutary epoch in the cultural enlightenment of the most significant and, perhaps, also the most celebrated royal family in the contemporary era. Less than a half-century ago, Ms. Markle would have been roundly disqualified from any conjugal affiliation with the Windsor Clan, at least on two counts, namely, the fact that Prince Harry’s bride-to-be is a divorced woman and thus conjugally blighted or morally contaminated’ and two, the genetic fact of her Diaspora African heritage.

But, of course, as hinted at the beginning of this column, we are living in more enlightened times. Had the General-Secretary of Ghana’s main opposition National Democratic Congress (NDC) paid critical attention to the wisely measured response given the Al-Jazeera television journalist, on the controversial question of legalizing homosexuality, Mr. Johnson Asiedu-Nketia would have unmistakably noticed that President Addo DankwaAkufo-Addo’s emphasis was on the “Diachronic Factor” of historical change in the affairs of humanity, and not the strategic plan that ought to be adopted by the LGBTQI community in order to gain acceptance into the mainstream of Ghanaian culture (See “Akufo-Addo Teaching Homosexuals How to Fight for Legalization – Asiedu-Nketia” Ghanaweb.com 12/1/17).

At any rate, Mr. Asiedu-Nketia’s argument that the country’s criminal laws are not being abrogated because stark distinctions need to be made between acceptable and unacceptable, or objectionable, behavior, in order to ensure social stability and cultural sanity does not hold water. It does not hold water precisely because the mere existence of our criminal code or laws did not prevent the man popularly known as General Mosquito from colluding with Mr. JabeshAmissah-Arthur to exorbitantly overprice cement blocks that a company owned by Mr. Asiedu-Nketia illegally supplied the management of the Bui Dam Power Project. We must quickly point out the fact that Mr. JabeshAmissah-Arthur, the younger brother of then-Vice President Kwesi BekoeAmissah-Arthur, was also the Chief Executive Officer (CEO) of the Kufuor-initiated Bui Dam Power Project and Head of the Bui Dam Authority (BDA).

The decision to allow the Asiedu-Nketia brick-making company to supply the BDA with the most expensive concrete blocks – there were already in existence other non-politically connected brick-supply firms – was a criminal violation of the law because there is absolutely no evidence that the Asiedu-Nketia firm offered value-for-money in any way shape or form that the other contractual rivals or competitors did not. In other words, Mr. Asiedu-Nketia had willfully and criminally used his political influence as a mover-and-shaker of the Mahama-led government of the National Democratic Congress to unconscionably defraud and extort undeserved and unearned money from the Ghanaian taxpayer. Now, I don’t see the superiority of the scamming of the Ghanaian taxpayer to the assertion and the safeguarding of the inalienable human and constitutional rights of Ghana’s LGBTQI community.

The homosexuality of decent, respectable and law-abiding Ghanaians must, per force, be protected and preferred over and above the abject criminality and pathological scam-artistry of the likes of Messrs. Asiedu-Nketia and JabeshAmissah-Arthur any day and at any time. You see, what well-meaning and progressive Ghanaian citizens ought to be discussing with all the seriousness that the subject requires, is the quality-of-life improvement of the proverbial average Ghanaian, and not the purely personal and subjective decision of whom one decides to love or consensually mate with. Even as I write, President Akufo-Addo has just announced that food agriculture has experienced a precipitous decline since 2010. Now, we all know whose government or regime owes Ghanaians the lion’s share of accountability.