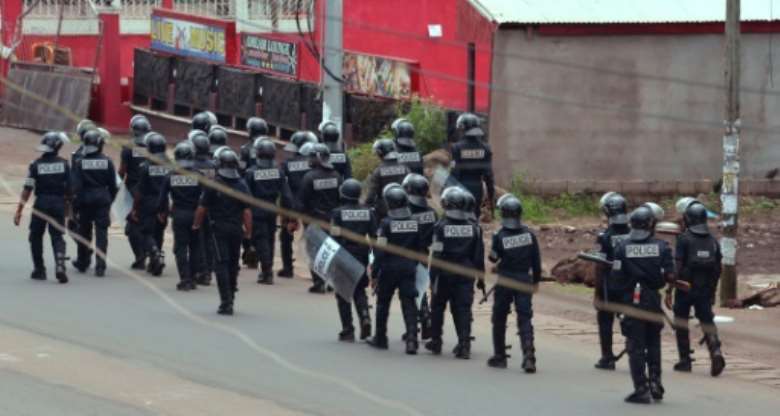 English speakers say they suffer inequality and discrimination in Cameroon, and last month a breakaway movement issued a symbolic declaration of independence which was met with a government crackdown. By STR (AFP/File)

A Cameroon policeman has been killed while pursuing men who attacked a school in one of the country's English-speaking regions, where tensions have fuelled a separatist movement, authorities told AFP on Tuesday.

"Suspected separatists gunned down a gendarme yesterday (Monday) in Jakiri," a town in the country's northwest, a source close to local authorities said, an account confirmed by a government source.

"They killed him with the officer's own gun," the sourced added, speaking on condition of anonymity.

Police were in pursuit when the officer found himself cut off and encircled by the attackers in a forest, the source said.

French-speaking Cameroon has a large anglophone minority which comprises about a fifth of its population of 22 million.

Gathered mainly in two regions, many English speakers say they suffer inequality and discrimination, and last month a breakaway movement issued a symbolic declaration of independence which was met with a government crackdown.

International monitors say at least 20 and possibly 40 people have been killed in clashes since late September, but those figures are disputed by the government of President Paul Biya.

Leaders of the secessionist drive have urged locals to form self-defence groups against the "occupation forces", after the government deployed thousands of soldiers to the regions.